I was intrigued when this was first advertised, a Netflix action blockbuster with Charlize Theron in it based on a Graphic Novel, it seemed that everything was aligning in the film world for a great summer film; in the current craziness and without cinema access, good films have been as hard to find as an honest politician! I was pretty excited and bagsied the TV on a Saturday night with the promise to Shell that she was bound to be in for a treat (I’m such a great other half!). In preparation, I moseyed on over to a certain online store, that is like the Nile but on a different continent. No free advertising from me! Anyway, I digress, I purchased the Graphic Novel and set about learning about the world I was about to delve into. Honestly, the Graphic Novel was a bit blah! Good story, but didn’t grip me and I wasn’t a fan of the artistry, not that I can talk as I’m proud of myself if I can paint by numbers! However, it should have been a warning bell for me, but oh no, not me, I forged ahead towards Saturday! 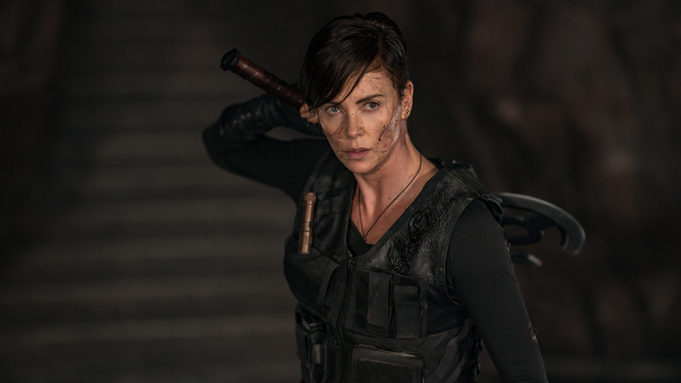 Just like in a Sean Bean film, when Saturday came, I donned my Sheffield United top, and sat down for 90 minutes of adrenalin-fuelled, end-to-end action. Or a 125 minutes long film at the very least. The story was similar to that of the book, a group of mercenaries are the best at what they do, kind of like The A-Team, but with the extra bonus of being able to live for a very long time and not having to live in the Los Angeles underground. They can get shot, stabbed, blown up, poisoned, tickled to death and up they pop, give them a bit of time to grow some skin or for their eyeballs to de-liquefy or their intestines to suck back in and they are good to go – I mean no wonder they are top of their game when they can literally outlive the opposition. Things aren’t that simple, after centuries of just getting on with their thing, the modern world has noticed them, dang these modern paraphernalia of cameras and the internet – things are about to get up close and personal, add to that a new Old Guard member, who has luckily just popped up at well and we have a movie.

Well, we have a movie if you’re just up for lots of blood and gore and injuries that can heal – think of Hayden Panettiere’s character in Heroes and times it by four, sometimes five! Explosions and double crosses and a rather moody Miss Theron. Then you are in for treat.

Charlize Theron has a bit of action previous, with Mad Max and Atomic Blonde and she is an outstanding actress, so she is good value throughout. The other characters don’t really get to show their personalities too much, apart from some great scenes between Luca Marinelli’s Nicky and Marwan Kenzari’s Joe, which added some much needed humanity to the proceedings. The surprise was Harry Potter’s Cousin Dudley, aka Harry Melling, turning up as a business tycoon; I really was just waiting for Richard Griffiths and Fiona Shaw to be sitting in a floral front room at the top of his penthouse being kept to the standard they wanted to get used to.

The Bottom Line:
Overall, The Old Guard isn’t that bad. It’s just not really that good, either. Don’t get me wrong, this was an enjoyable action film and it might well be the start of a series of films which could open up this world much more, I think my problem was reading the Graphic Novel first and not really enjoying that, it gave me a bias I couldn’t get passed and I pretty much knew what was going to happen as well. So, don’t be a Dabbler and ruin it for yourselves! If you have Netflix, it’s free and worth a couple of hours on a Saturday night. – 5.5/10