Another film down during the quarantine, and this time it’s Netflix’s latest action-adventure film titled Extraction, starring Thor the God of… ah sorry about that, I mean starring Chris Hemsworth. Hemsworth plays the part of Tyler, a beaten-in war vet that is assigned to rescue the son of a notorious Bangladeshi drug lord, all while shooting and punching his way through police, and agents trying to stop him, but things take a turn for the worst as parties get double-crossed. This film explores the themes compassion for the youth, acceptance of the past, and that’s pretty much it. This film is more focused on the boom-pow of the beautifully choreographed fight scenes, the expert cinematography of chase scenes, and the visual effects of non-stop bullets, and explosives. 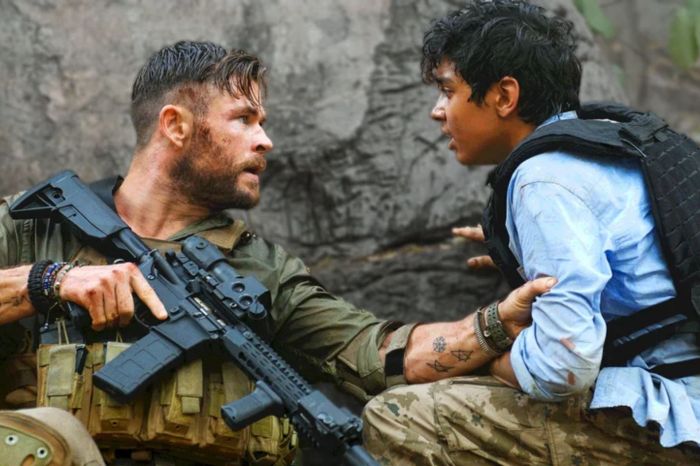 This Netflix original is produced by the Russo brothers, known for their directorial work on various Marvel films, and is directed by Sam Hargrave, making his feature directorial debut, who is known for his work as stunt coordinator on the Russo brothers Marvel films. Extraction is a neat treat for viewers who are missing out on high energy spectacles due to this damned coronavirus. At just under an hour and 45 minutes, this film expertly brings the elements from what we love from the John Wick films, but overall lacks any convincing performances, Hemsworth included, while having weak, and oddly quiet dialogue.

Extraction is set-in present-day India and Bangladesh, opens up on the son of an extremely wealthy, and intimidating drug lord, Ovi, as he tries to live a normal live despite the watchful eye of one of his father’s goons, Saju. Ovi goes to the club with his friends and smokes a doobie, and the police roll up to kill the vibe. The officer gives them a hard time at first, but insists he’s just joking around, but gives Ovi something else to worry about as he proceeds to shoot Ovi’s friend in the face and kidnaps him as a member of a rival drug gang. Saju goes to the prison where Ovi’s father, demands that Saju rescues Ovi or else he harms his son. But during the conversation it’s less about rescuing Ovi, and more about preserving the dignity of the drug gang.

We are then introduced to the protagonist, Tyler, as he attempts to live a peaceful life in Australia, trying to overcome the loss of his son. In classic action movie fashion, a mysterious character, Nik, comes to hire Tyler as a mercenary to retrieve Ovi. After little-to-no contemplation, Tyler accepts the mission for the money. Tyler purposely gets captured to make the swap with the Ovi’s captives, and beautifully takes them all down, rescuing Ovi and beginning their journey of the extraction.

The Bottom Line:
Extraction is a bloody, violent, and extremely impressive visual spectacle that features an insane 12-minute, one shot action sequence. This film lacks any real convincing characters, but strength of character isn’t really what this film is about. If you love the action sequences from the films like John Wick, love chase scenes as they weave through various Indian environments, or are simply a fan of Hemsworth, then you might just like this movie, too. It’s pure, mindless action movie stuff… but hey, at least it’s something new to watch on the couch during a pandemic. – 6.0/10