Three Quarters, the latest short film from A Stranger Concept Films in association with JK::Films and us here at Nerd Nation Entertainment recently launched its official Indiegogo crowdfunding campaign – WHICH CAN BE SEEN HERE! 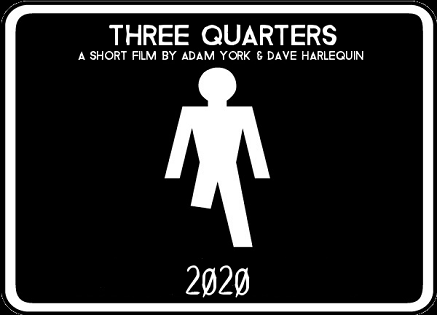 Three Quarters is a dramatic suspense short film with sci-fi/supernatural elements in the vein of classic psychological horror and suspense such as ‘The Twilight Zone’ and ‘The Outer Limits’. Written by Adam York, produced by York and Matthew Ketcham, shot/edited by Jesse H. Knight, and directed by Nerd Nation’s very own Dave Harlequin, the film stars York alongside longtime independent film veterans David G. Holland and Bill Mulligan.

Three Quarters tells the story of Jack (York), a middle-aged man, who struggles to adjust and come to terms with his new life as an amputee as he is stalked and tormented by a strange, supernatural entity (Holland). This is an extremely personal story for writer/producer Adam York, who is a real-life cancer survivor and above the knee amputee.

Filming is set to begin in late April in and around Charlotte, North Carolina with an expected festival circuit release around fall of 2020 and worldwide release on streaming platforms in 2021. More information on this can be found at the film’s official IMDB page.