Completing Martin Scorsese’s mob milieu, The Irishman is a 3 and a half hour riveting crime epic sprawling across decades and is the director’s most accomplished work since Goodfellas.

Based off Charles Brandt’s I Heard you Paint Houses – a non-fictional narrative concerning the later life of union baron Jimmy Hoffa – The Irishman revives classic ideas of brotherhood, loyalty and betrayal in the exploration of a relationship between three men, all with deep entrenchment in the underground world of organised crime.

Hoffa, and as the film quickly reminds us, at the time, as head of the nation’s most powerful union was second only to the president in notoriety, approaches Russell, played with intense economical efficiency by Joe Pesci, expressing interest in recruiting Frank Sheeran, the titular character, a World War 2 veteran, with the euphemism of “I heard you paint houses”. 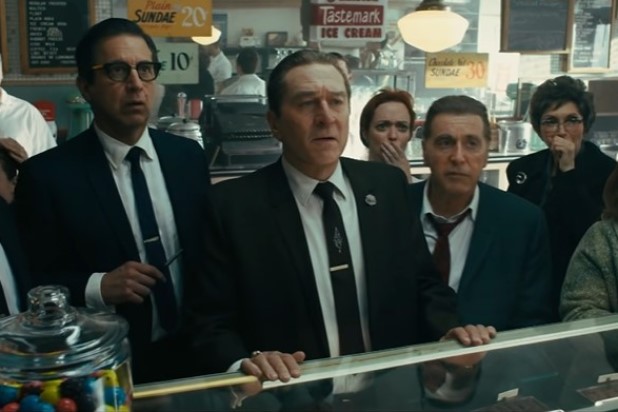 From here, The Irishman imagines a world of slow and deliberate contemplation, where decisions are communicated not through words but through tacit acknowledgement and silent understandings. There will be conversations in cars, in bars and in people’s homes where decisions to exert violence are made with a silent sigh of inevitability and the camera work is sharp enough to record every furrowed brow and raised eyebrow of unsaid concern.

Robert De Niro has a marvelous scene in the film’s set piece where he is unable to articulate his concerns to a close friend, as a life in the denies men the language and emotional intelligence to communicate anything beyond platitudes.

As Hoffa’s union empire starts to creak under its own pressure tensions over-spill, the controlled violence increases in regularity and already paranoid men start evaluating the loyalty of the men they have surrounded themselves with. From here relationships are poisoned and the three men look set on a fatalistic collision course.

Once the stakes become clear and the film’s central dynamic is established The Irishman is capable of standing up against the director’s best work, and lest we forget, Scorsese made Goodfellas and Raging Bull. Getting to this stage may not be as swift as some viewers would like but much credit goes to editor Thelma Schoonmaker in making an almost 4-hour feature coherent and pleasurable to watch.

The feeling and sheer weight of occasion here given the pedigree of talent behind and in front of the camera is met with a trio of complimentary, idiosyncratic and yet broadly recognizable performances, each actor applying their own signature spin while managing to disappear into their character.

Pesci who reportedly turned the film down 50 times, is especially good here, conjuring images of Brando’s Godfather in the sheer economical efficiency of speech and movement he imbues into Russell.

Soaked in the fabric of The Irishman is the sense that is a film made by a master craftsman and the process at every step has been meticulous, namely the costume design which functions perfectly as a signpost of which decade the film has moved onto now.

The malleability of time is of course a Scorsese staple and arguably it has never been more pivotal than in The Irishman, and as the film weaves a tapestry of decades the sheer vivid detail and thematic depth becomes apparent. The world feels real and as lived in as anything Scorsese has ever produced and this is The Irishman’s greatest strength.

The Bottom Line:
The 3-hour-plus runtime is masterfully disciplined and we get the epic mob procedural we were hoping for. This is not Goodfellas, and it is not Casino. it is a very different beast, more meditative, ruminative, and introspective. It feels like the closing of a chapter in Scorsese’s, De Niro, Pesci and Pacino’s careers and Scorsese’s artistic apology of Goodfellas hyper energetic, visceral violence. Simply put, this is an absolutely masterclass in cinema and a definite must-see. Disney+ may be gaining a lot of market share nowadays, but Netflix just reminded us that it isn’t going anywhere. – 9.0/10