Currently in theaters is The House with a Clock in its Walls, starring: Jack Black, Kate Blanchett, and Owen Vaccaro, and directed by Eli Roth. Nerd Nation Magazine was in attendance for the early press screening courtesy of Universal Pictures, Allied Marketing, and Regal Cinemas. 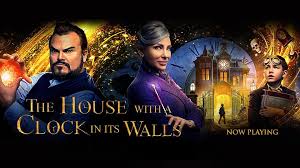 Straight off the bat, I’m going to say this is a “cute” family flick. If you’re looking for some Harry Potter level of cinema greatness here, you’re not going to get it. It’s cute, follows the book pretty well with a few additions to spice up the visuals, and the story line (which it desperately needed in my opinion, because the book had a lot drag points considering its size) and, overall, it was rather enjoyable.

The movie follows two story lines, the one of the main protagonist, Lewis Barnavelt (Owen Vaccaro) who, for reasons I’m not going to mention, has come to live with his uncle, Jonathan Barnavelt (Jack Black) and that of his uncle’s odd behavior as he looks for the mysterious clock hidden somewhere in his house. 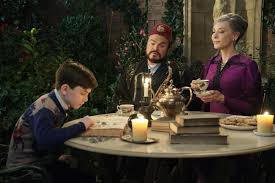 Like a lot of kid’s stories, which this is, make no bones about it, it follows an awkward kid who, rather than attempting to fit in, tries to find that one kid who will accept him. Lewis thinks he finds him in his main antagonist, Tarby, a kid who’s stuck with what he can get in friendship as his arm heals. I could go into how this is juxtaposed with Lewis’ own antagonist, Isaac Izard, played by Kyle MacLachlan, but I won’t. This is a review not a thesis paper.

In an attempt to impress Tarby, Lewis confides in him the one interesting thing he’s learned about his uncle, that magic is real and his uncle is a warlock (though, not a full fledged one) and his neighbor, Mrs. Zimmerman (Kate Blanchett) is a witch. Of course, he isn’t believed, but it does win him a few more precious moments with his “friend” but, for the sake of the movie, is really only to introduce us to something that will further the plot.

Is the movie great? Eh, no, but it’s cute, and good enough to entertain the kiddos for a few hours. I enjoyed it, but mostly because I love Jack Black. I read the story first to prep for this, so I know where they’ve added and nipped things, which, considering the book was written before I was born, was a good way to keep it in period but also bring it forward.

I was in told by my editor that it had a Harry Potter rip off feel to it, but, as the book predates the HP series, I’m not sure I agree with that. It might seem that way, as those movies were made first, but, really, if you pay attention, the premises are worlds apart.

Again, it was a cute children’s movie with some creepy elements that hearken to Goosebumps, which, as I recall, was another thing he mentioned it seemed like, which I agree with, and, considering Jack Black is in both, really isn’t surprising. I liked it, and will be purchasing it for family movie night, but it isn’t a cinematic masterpiece, nor will it win any awards.

The Bottom Line:
Overall, The House with the Clock in its Walls was an okay movie… mostly because it did what it set out to do, it absolutely entertained my kids while still managing to represent the original story with a few additives. Probably the closest adaptation such as this that I’ve seen to date. Read the book, watch the movie, and you’ll understand what I mean. Was it basically “Harry Potter and the Chamber of Goosebumps”? Well, yes, if you ask our editor and don’t count that the source material came before those, but it was also a fun kids movie and didn’t really need to be anything else. It’s fun enough and worth a watch, just maybe not worth paying theater money on. – 6.0/10