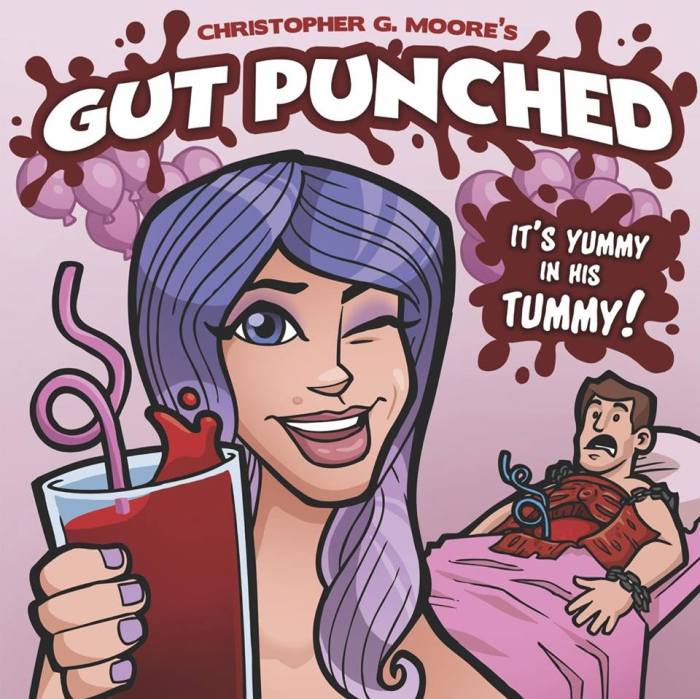 Gut Punched tells the story of Rex (Tom A. Major in his breakout role), a womanizing young man who while sitting at a bar scoping out the local ladies is approached by a stunning young woman named Kimatra (Sara Gorsky of Chrysalis and I Married a Murderer) who is equal parts beautiful, seductive, and a little unusual. After a few drinks, and some less-than-subtle flirting the two head back to her place for a nightcap, but what young Rex doesn’t realize is that he may be in store for a lot more than he signed up for. What is that, you may ask? Well, you’ll just have to watch it and see for yourselves!

Worth mentioning here is the absolutely incredible camera-work on display for this one. If I didn’t know better, I’d say this was definitely a big-budget project with a major studio backing it. Every single frame is just spectacular in its visual presentation, with plenty of care given to both lighting and sound – two things that so often suffer in indie film. In fact, this seems to be a recurring theme with all of Moore‘s work – every one I’ve seen has top-notch cinematography with exceptional use of lighting and angles for a fully immersive movie-watching experience. I’m honestly not sure who’s been handling the DP duties around “Camp Moore,” but they really, really deserve a raise!

About my only real complaint with this one is that it seems to sort of rush through the most intense parts, with the lead actor almost no-selling the scene. This could absolutely have been done on purpose for comedic effect, or it could have everything to do with inexperience from the actor. Either way, I would’ve very much liked to see a bit more tension and gravity around that one to sort of mitigate the comedy there. That being said, when it comes to horror/comedies, I understand that there’s such a fine line to walk, and not everyone will always have the same vision. Either way, it’s a very minor gripe (bordering on nitpicky, I know) but that’s pretty much the only criticism I’ve got for this.

The Bottom Line:
Overall, Gut Punched is an exceptional horror/comedy short, and yet another example of why Christopher G. Moore is one of the more underrated directors in the indies today. The cinematography, lighting, and overall presentation of the film make it extremely easy to get lost in, and that combined with the short 10-minute runtime definitely makes it, no pun intended (okay, maybe a little intended), easy to swallow and digest. This one is already racking up awards on the film festival circuit, taking home ‘Best Comedy‘ at the 2018 Mad Monster Film Fest and ‘Viewers Choice Award‘ at the 2018 MystiCon Independent Film Festival, and if you get the opportunity to see it, you’ll definitely understand why. Go see this one, folks. You’re in for a treat! – 9.0/10