2018 marks Nerd Nation’s fourth year traversing the land and bringing you the latest goings on in the ever-expanding convention world, and 2018 saw us kick off the new year at Days of the Dead: Atlanta. 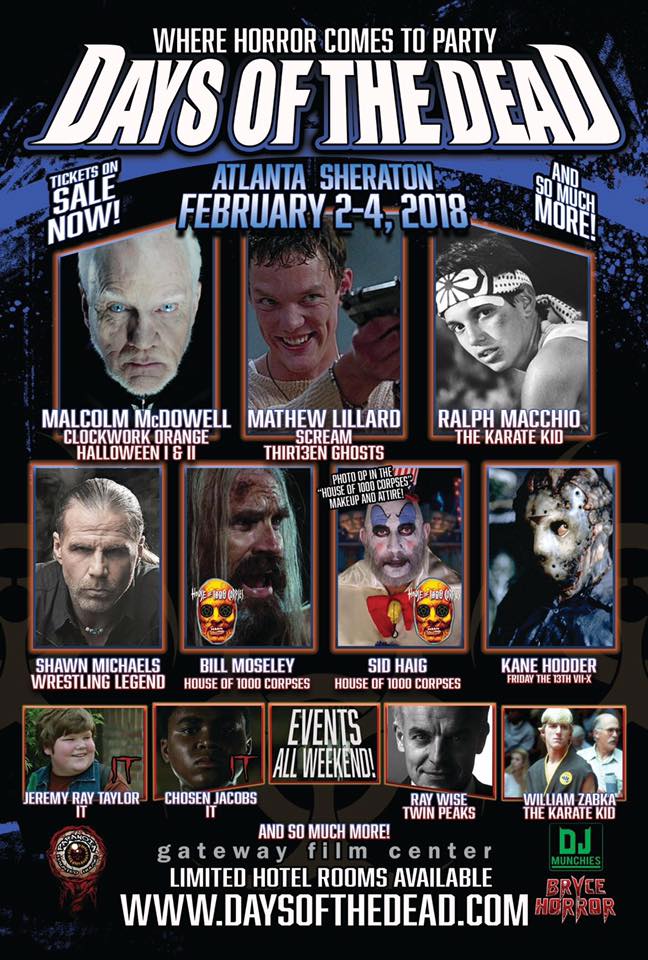 This is the seventh year for the famed horror-themed convention in Atlanta, GA, that also holds annual events in several major cities throughout the year, including Indianapolis, Chicago, Charlotte, and Louisville. Organizer Adolfo Dorta and co. have really mastered the art of the traveling convention, by offering jam-packed all-star celebrity guest lineups, top-quality vendors, a wide selection of intimate Q&A panels, an excellent film festival that runs all night long, and most of all plenty of fun things to do throughout each weekend!

Unlike many other cons of this size and caliber, Days of the Dead keeps their conventions in ONE hotel, which offers easy access (and far less chance of the bad kind of horror in the infamous Atlanta traffic) for everyone attending. Immediately when you walk in the doors of the Sheraton Downtown Atlanta, you’re transported into another realm, with music blaring, giant-sized creatures towering overhead, and a friendly, approachable ‘by fans, for fans’ mentality that is very much on display from everyone working the event.

Nerd Nation had the pleasure of being able to interview numerous legendary stars and a few personal heroes of ours including Ernie Hudson, Malcolm McDowell, The Rock n Roll Express, and Bill Mosley, to name a few, as well as catch up with our longtime personal friends Captain Stab-Tuggo & Maybelle;  all of which we are tirelessly working on, and will have up on our official YouTube channel very soon, as well as transcribed for your reading pleasure right here at Nerd Nation. We also got to grab some cool autographs to hang in the offices, caught some great films at the film festival, witnessed the always-fun “Scaryoke”, and our own Dave Ward even took home 2nd place in the annual tattoo contest! But above all else, the most enjoyable thing we did was hang out with all of our Atlanta-area friends and readers, meet several new ones, and just have one hell of a fun time partying in a great environment that really went above and beyond to make us feel welcome.

Now, obviously no convention is ever perfect, and anyone who has ever worked a convention in any capacity (and we personally have worked in just about all of them at countless cons over the years) can tell you that running a convention is just about the biggest logistical nightmare one can undertake. With so many moving parts, so much to keep up with, and, if done correctly, so many people in attendance to tend to, it’s hard (if not impossible) to have a convention without any problems or issues arise during the weekend. That being said, if Days of the Dead: Atlanta had any problems or issues during its 2018 offering, we definitely did not see them. Absolutely everything seemed perfectly streamlined and simple – from the registration which was simple, easy, and above all else- friendly, to very clearly posted, accurate schedules all over the place, and even knowledgeable staff conveniently positioned everywhere. While not trying to sound too much like a sycophant here (and believe me, I’m as surprised as you dear readers with how much positive is in this review) I’m not sure if the show-runners would ever be interested in writing a book on how to run a con… but they freakin’ should!

The Bottom Line:
Overall, Days of the Dead is one of the best themed conventions going right now, and it absolutely shows with the dedicated staff that travel all over the nation tirelessly bringing the horror with a big side of fun. Far too many conventions (and let’s be honest, ESPECIALLY horror conventions) out there are basically just celebrity autograph shows and not much more, where fans literally pay money to get in and go pay more money. I’m sorry, but it’s true. DOTD absolutely offers actual fun stuff to… you know… DO, and actually gives its attendees quite a bit more for the price of admission. The 2018 Atlanta offering was absolutely outstanding, and we are already very much looking forward to May 18-20 when these fine folks will be bringing all of this to our hometown of Charlotte! We hope to see many of you dear readers out there!

Check out DaysOfTheDead.com, grab some tickets, and go to one (or like us, several) of these events. I promise you will not be disappointed. And stay tuned for tons more exclusive interviews from DOTD: Atlanta 2018 right here at Nerd Nation!