Skip to content
Greetings Nerds!
This past Sunday, we were treated to the new Seth McFarlane-created sci-fi drama/comedy The Orville.

While this writer enjoyed it, and most actual humans on social media tend to agree with me, having a whopping 91% approval rating on Rotten Tomatoes; it seems the majority of the stiff, underwear-in-tight-spaces TV critics out there absolutely hated it. Let’s take a quick look at just a few of them…
The Chicago Tribune calling it a “Humorless and lifeless void”
MSN incorrectly reporting Rotten Tomatoes has it only with 11% approval
The Hollywood Reporter slamming the use of Star Trek directors and carrying the same theme.
I could go on, but you get the point.

Here’s the truth, folks…
The Orville has a bad rap off the bat because of who created it. Seth McFarlane is known for Family Guy and other potty humor related cartoons that either make us laugh or cringe and look away. McFarlane also co-produced the newest version of Carl Sagan‘s classic Cosmos with Ann Druyan and Dr. Neil DeGrasse Tyson; also being a die hard science/science-fiction fan, which includes Star Trek.

The Orville uses a lot of Star Trek references, also using a lot of similar scene setups to the series in this initial episode (catch the Original Motion Picture nod when he was addressing the crew?) and also drawing on its heritage for the overall tone of the show, while not stringently adhering to everything ST looks or sounds like.  McFarlane does add his own brand of humor, cameos, and intelligence to the show, even admitting for things that happen in later episodes that he consulted with Dr. Tyson and Druyan on whether things would theoretically be possible in the environment the show is set in.  I also find appealing that the overall attitude is more on the loose side;  like listening to the argument in the ready room, cracking jokes about what they see while communicating, allowing soda on the comm, etc.  Things that put a different spin on what 400 years in the future is like.  Sometimes things don’t change quite so much over time. 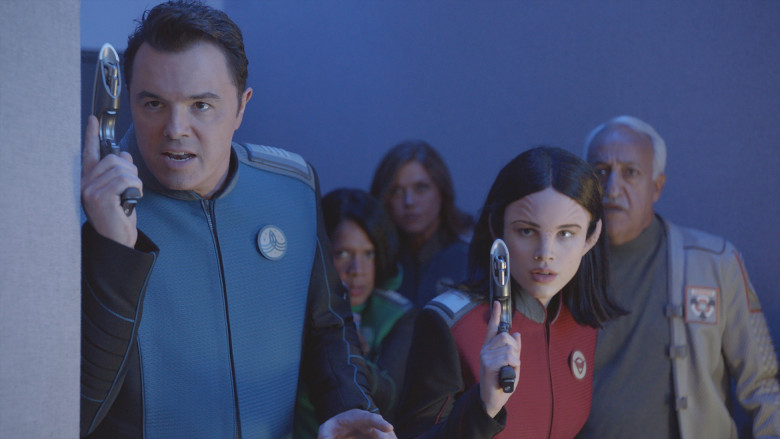 The Bottom Line:
Overall, the rule applies with the TV watching audience:  If the critics hate it, then more than likely it’s actual good TV to watch, and the more likely it is to be canned.  Hopefully this will not happen with The Orville, as Prime Time Sci-Fi needs something to fill the void of the lunacy CBS and NBC Universal keep dishing out. Either way, even with just one episode in the books for the first season, this new show looks poised to be one of the better bits of science fiction we’ve seen on TV in quite some time.
-No rating yet, as the season isn’t even close to done… but so far, so good!
.
-Dave Ward
Staff Writer/First Ambassador: Nerd Nation Magazine
@DaveWard1279
Advertisement