On Sunday, April 23, 2017 I was a guest artist at the Daytona Beach Comic Con hosted by Tom Raupp, a fellow vendor.  It’s a one-day marketplace celebrating comic books and collectibles with a little cross over into pop-culture and Pokemon.  I had done the show a few times and I always thought it was a nice, small show with a humble venue.  That hasn’t changed.

However, the show is starting to show signs of growth.  The show welcomed twenty-six comic book guest artists and writers and over fifty vendors across one hundred and eighty-four tables, most of whom occupied several booths, making the show’s exhibit hall feel exceptionally large.  The convention had a few small games, a costume contest, raffles, and other small activities as well as food trucks to entertain and feed attendees.

The Daytona Beach Comic Con is held twice a year in the Embry-Riddle ICI Center.  In 2015, the vendor hall occupied half of the facility.  I thought that was a good size for the show and was surprised to see a much larger floor plan two weeks prior to the convention.  Let me clarify.  By surprised I meant concerned.  I had always seen the show as a tiny thing, something for the Daytona comic book community without much crossover into other genres.  Doubling the size of the exhibit hall did not seem wise.  I was concerned that Tom might have been falling into the same trap many other great small conventions find themselves: going too big too fast.  With one hundred and eighty-four tables for a one day show that lacked multi-genre appeal while also being the same weekend as Spooky Empire in Orlando (which is about two hours away), I went into the event with genuine concern. 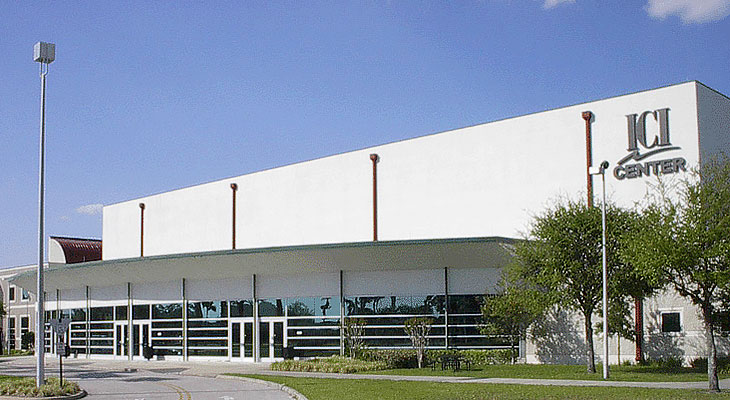 Fortunately, I did not have a significant financial investment in the show.  Tables for the 2017 spring show were only $75 each and provided plenty of space behind the booth for me, my massive print wall, and my merchandise.  I find the cost of the table reasonable, given the size of the show and the accommodations.

One thing that I love about Tom’s show is how easy everything is.  Load-in is a piece of cake, even if you have a trailer.  You just pull up to the back of the venue and cart everything right into the gym before pulling around to a more permanent parking space.  Parking is abundant and free.  Tom usually has small push carts to help vendors and he’s always readily accessible to get your badge.  He’ll even stop by your booth to give them to you if he hasn’t seen you yet.  I love it when I can go to a convention and my table is exactly is as specified, when it is ready for me to set up, when I can easily find my location because I have a floor-plan in advance.  This con is always low stress and I love that!

My only mini-gripe about the convention this year is that guests were a little spread out.  Originally, my booth was going to be closer to the back until I brought it to his attention.  Once I was there, I was surprised to find Monica Ravenwolf in the back/middle of the convention, even though she, too, was a guest.  Whether I’m attending a convention or vending, I like when the guests are in a clearly defined place, preferably with signage to indicate such.  I also like when the guests are farther to the back of a convention hall so that attendees walk through the vendors and artists first.  At the Daytona Beach Comic Con, the arrangement is always a little different.  In 2016, guests were in the center of the show’s floor.  This time, they were at the front and along the side, predominantly.  I get the impression that different layouts are being tested to get a feel for what works best for the convention.  (That’s a good thing!)  Given that this was the first year with the larger floor plan, I think this is something that will naturally work itself out, over time. Regardless, as long as I pay attention to where I’m at prior to arrival, I know that Tom will take care of me.

Speaking to the guest accommodations, Tom provides lunch, drinks, and tablecloths to his guest artists and writers.  I love this!  He’s always very accommodating and accessible prior to and during the show. But enough doting on Tom!  Let’s get down to the attendance.

Daytona Beach Comic Con is a small show.  That being said, my sales doubled from the prior year.  This could be because I had more space, more prints, or the better location.  I wasn’t able to get a new book released in time for the show (Zombies! I’m so tired of drawing zombies!), but that didn’t seem to hurt my sales significantly.  There were a few people who were bummed that they couldn’t get my latest issue, but they were very understanding and I appreciate that.  I sold out of several prints from older series like Slayers and YuYu Hakusho, but didn’t move much in the way of One Punch Man or Jojo’s Bizarre Adventure merchandise, which is strange.  This crowd is definitely different from what I typically see when I hit anime and multi-genre conventions.

I was delighted to find that a few people came to see me from Orlando, in spite of MegaCon being right around the corner and Spooky Empire being held the same weekend.  I was also surprised to see some South Florida and Jacksonville fans make the longer drives.  This was a big contrast to prior shows where most of my customers at this show were from the immediate Daytona area.  I had a great time seeing so many familiar faces and also meeting some new Daytona folks!

Sometimes, you go to a small community convention and you find that most of your customers are vendors and it’s a little disheartening.  That is absolutely not the case in Daytona.

When I talked to Tom, he said there were about one-thousand attendees this year. Regardless of how many people came through the door, I found that I was constantly busy talking to people at my booth.  There were times I felt that the eight foot aisles looked a little barren, but there were always people and most of them were actively shopping.

Speaking of Daytona itself, there are many vendors and artists who are concerned about doing shows in Florida or the Daytona area, which hasn’t had too much luck with lasting conventions.  Florida, as a whole, is widely considered one of the worst states for vendors at a convention.  It’s always a risk because we have too many conventions happening in close proximity to each other.  Take this weekend as an example.  Both Spooky Empire and the Daytona Beach Comic Con were on the same weekend.  While both seemingly appeal to different demographics, it’s still two events within two hours of each other which forces fans, vendors, and artists to pick one over the other.  Sometimes, fans pick both which results in a net loss to all vendors since the travel and convention attendance costs are increased for attendees who opt to do both.  Hence, risky – especially if you’re coming to Florida from out of state.  I picked Daytona because I know Tom will take care of his guests and vendors and I felt the price was reasonable.  Spooky Empire doesn’t seem to appeal to my existing fan base and the price was more expensive and required a multi-day commitment, which I couldn’t spare in preparing for upcoming conventions.  So, for me, Daytona was the obvious choice.  That being said, I might not have booked it had I realized the two shows were the same day.  In the end, I’m glad I did.

As for the Daytona Beach Comic Con this year, it fared well considering the oversaturation of conventions in our state as well as the reputation Daytona has after UmiCon cancelled their event in 2016 and hosting a lackluster 2014 and 2015 show for anime fans, from what I’ve heard from attendees and other vendors.

If you’re a vendor or artist in Florida looking for a good show, try putting this one on your list for fall 2017 or 2018 to see how you do.  If you’re travelling from farther than Savannah, Georgia, however, it might not be worth your time unless you’re a large comic book or collectibles vendor.

All things considered, the Daytona Beach Comic Con is on the upswing!  It’s a great local convention with a lot of love and passion.  According to Tom, the vendor hall will be at half size for his November show (returning to full size in the spring of 2018), but don’t let that deter you from attending or participating if you’re willing to make a day trip!  For attendees, the $8 admission is quite affordable for a nice weekend outing with friends and family.  While I cannot commit to this year’s fall event, I’m looking forward to participating in the 2018 spring show and can’t wait to see everyone again!