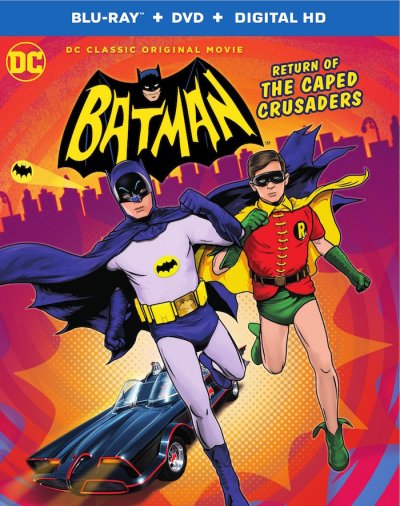 Fifty years after they donned their tights, Adam West and Burt Ward return as Gotham City’s top crime fighters while Julie Newmar reprises her role as that city’s sexiest villain (and arguably still the best Catwoman of all time) in the latest offering from Warner Bros. Animation and DC Comics – Batman: Return of the Caped Crusaders.

The film begins with a montage of some of the most famous covers of Detective Comics and Batman Comics coming to life with West’s and Ward’s interpretation of the characters. Though it is a subtle touch, it can nonetheless be interpreted as DC’s tacit acknowledgement of the importance of the 1966 television show to the Batman mythos, and how for “baby boomers” West and Ward will always be the Dynamic Duo personified.

The plot, which borrows from 1966’s Batman theatrical film, find the Caped Crusaders still in the 1960s battling wits with their four greatest nemesis, The Joker, The Penguin, The Riddler and Catwoman who are out to steal a duplicating ray. Along the way, Batman falls victim to a potion from Catwoman that dramatically changes his personality, even worse than she intended it to. Consequently, she and Robin must save the day.

For sharped-eye fans of the television show, the film is full of “Easter eggs” and inside gags, some of which even take jabs at the recent live action films. Numerous homages to the silver age Batman are spread throughout the movie. Particularly fun is a brief scene where Batman sees Newmar’s, Lee Meriwather’s and Eartha Kitt’s Catwoman all at the same time. Unfortunately the film lacks two things that made the original show so much fun: the campy, tongue-in-cheek narration and the window cameos.

Ward and Newmar do an excellent job recreating their roles. West is not bad, but his voice shows his age. (He is 88 after all) Still he and Newmar do an outstanding job of recreating the sexual chemistry that existed between Batman and Catwoman a half a century ago, which is a tribute to both their acting skills and their interpretation of the characters. 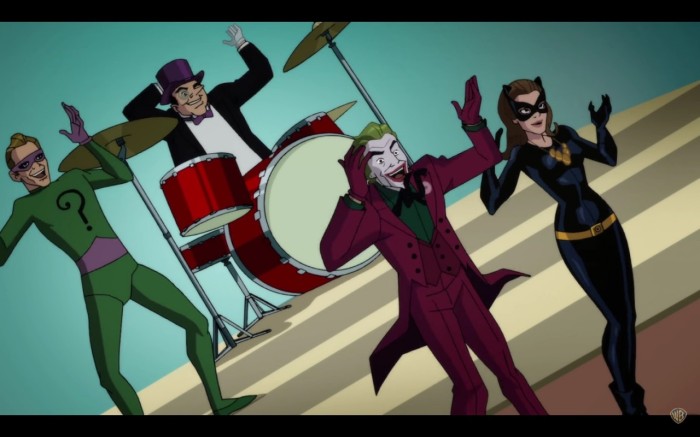 For the rest of the voice cast, Jeff Bergman does a fine job recreating Cesar Romero’s Joker. Wally Wingert nails it with his recreation of Frank Gorshin’s Riddler, and Lynn Marie Stewart does a delightful recreation of Madge Blake’s Aunt Harriet. Unfortunately, the rest of the cast does not fare as well. Disappointingly, except for Batman, Robin and Catwoman, all the other characters look like a cross between the actors who played them on t.v. and the way they were drawn in the comic books in the 1960s. Though to be fair, reportedly the rights to the likeness of all the actors from the 1966 program was unavailable.

Aside from that, the animation is better than what this reviewer has seen in a lot of recent DC-Warner Bros. Animation productions. The artists have done a good job of recreating the pop-art style of the show while the writers have remained true to the spirit of the original. It is the only non-Lego Batman release in 2016 that the whole family can enjoy. And be sure to watch the closing credits to the end.

The Bottom Line:
Overall, despite some flaws, Batman: Return of the Caped Crusaders absolutely delivers! If you are a fan of Batman 1966, you will definitely enjoy this DVD. If not, then skip it. This is a fun trip down memory lane that is bound to bring a smile to those who still think Adam West is the definitive Batman. – 8.0/10

BUT WAIT! THERE’S MORE! It has been announced that in 2017 Adam West will don the cowl again to face the biggest classic Bat-Villain that he never took on during the 60s: Two-Face, to be voiced by the legendary William Shatner (Star Trek). Until then stay tuned…  Same Bat Time, Same Bat Channel!