Seventeen years ago, The Blair Witch Project was all that anyone was talking about. When the quintessential “found-footage” film hit theatres in the summer of 1999, filmmakers Daniel Myrick and Eduardo Sánchez struck cinematic gold, broke box office records, and effectively caught lightning in a bottle in this story of would-be documentarians heading out into the Black Hills forest near Burkittsville, Maryland to investigate the legends of the Blair Witch that supposedly haunted the area. This film was so successful for a few reasons, but most notably because of its insanely high level of believability. This was during the early days of the internet, long before social media was really a thing, where having waves of information hurled at you on a daily basis wasn’t commonplace, and going online wasn’t even really part of the daily routine for most people. The truth was there, but was easy to not see back then, and a huge number of people absolutely didn’t.
Even bigger than that was the fact that The Blair Witch Project didn’t look like any other films anyone had seen. It was all shot on home video cameras, looked extremely amatuer, and its relatively unknown actors looked like average, regular, everyday people rather than Hollywood types. Absolutely everything about this film made suspension of disbelief very, very easy. 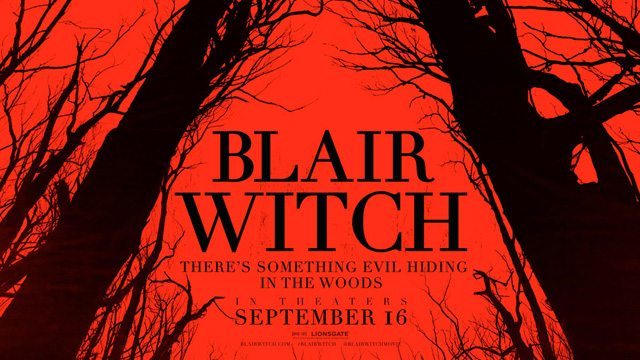 Fast forward to 2016, and Blair Witch – the third installment, and first true sequel (we won’t even get into the meta-sequel Blair Witch 2: Book of Shadows, beyond merely mentioning that it happened) in the series, is almost exactly the opposite of everything that made the original such a success.

WARNING: this review may contain minor spoilers, as it’s nearly impossible to properly review this film without mentioning some of them. We are fairly confident that you dear readers already basically know what’s going to happen here anyway, but just in case you’re worried for some reason, here’s your spoiler warning as a kindness.

Mentioned as footage that was discovered and edited togteher in the typical “based on true events” trope, Blair Witch follows the story of James Donahue (James Allen McCune of The Walking Dead) the younger brother of Heather Donahue from the original film, who, alongside his film student friend Lisa (Callie Hernandez of From Dusk Til Dawn: The Series), childhood best friend Peter (Brandon Scott of The Last of Us, Wreck-It Ralph) and Peter’s girlfriend Ashley (Corbin Reid of How to Get Away with Murder) heads out into the Black Hills of Burkittsville, MD to search for his sister and find closure some twenty years later.

This is all based on a video James watches on YouTube, where he believes he saw his sister alive in a strange, old house. They track down and meet up with a couple of local townies who apparently found the footage featured in said YouTube video, and know the lay of the land. The group goes out into the woods, sets up camp, and sure enough a series of strange, frightening events begin to take place. People start disappearing, others go looking for them, they eventually give up and stop looking for them for some reason, more people disappear, there’s a headache-inducing amount of screaming, bad decisions, and general uselessness from those left, you get the idea.

The “found-footage” aspect is difficult to rate, given that it’s intended to look the way it does, so I won’t go into that part at all, except to say that everything does look far better from a technical aspect than the original, which does take away from the experience. Moreover, all of the actors in this film actually look like professional actors, and instead of a believable group of regular, everyday people, audiences are faced with a good-looking group of kids that look like they crawled out of a teen drama on The CW or MTV. This is perhaps a minor gripe, but a valid one all the same.

The plot, while rather simple in concept, never really seems to actually go anywhere. There are some nice moments of horror, sure, but very little suspense and eventually it just relies on a ton of lazy jump scares, and scenes of people running through the woods screaming a lot. I mentioned this earlier in the review, I know, but it happens so much in this movie, and is so groan worthy, that I felt it was worth repeating. Nearly every famous trope from the original is given a shout out, from the stick figues to the rock formations to the old camera, to the close-up confessions, and everywhere in-between. This is nice and all, and there’s absolutely nothing wrong with a little nostalgia and fan-service, but it was so ham-fisted and forced feeling that it was laughable. And call me old-fashioned or a jerk, or whatever else you’d like, but I just don’t think laughable is a term that should ever be used to describe a horror film.

The Bottom Line:
Overall, Blair Witch just isn’t a very good film. At all. It manages to lose every single thing about the original that made it special or interesting, while also not presenting one single original idea of its own in its entire runtime. As mentioned above, it never really goes anywhere, and is basically just an hour and a half of complete idiots running through the woods screaming on shaky cameras. That’s honestly about all there is to even say about it. Definitely not recommended, particularly with modern cinema prices so high, but maybe worth watching on Netflix or something for a bad movie night if you need a good laugh at a frankly laughable effort. – 3.5/10