After a highly successful directorial debut with the 2013 remake of the Sam Raimi cult classic Evil Dead, Fede Alvarez tries his hand at an original property with this wildly effective and equally contained home invasion thriller. But how did it measure up to other such recent horrors? Read on to see for yourselves!

Set in Detroit, Michigan, Don’t Breathe follows the story of twenty-somethings Rocky (Jane Levy), her wannabe gangster boyfriend, Money (Daniel Zovatto), and her clean cut friend with a major crush, Alex (Dylan Minnette) who routinely break into homes of customers of Alex’s father’s security company. The trio are hoping to earn enough money to escape living in the crumbling motor city, fleeing to California, and Money suggests hitting the home of a blind Gulf War veteran (Stephen Lang), a man who received a fortune after a fatal car accident claimed the life of his only daughter. After the expected debating, ultimately the trio decide to make a moveand go after the big score… but none of them have any idea what kind of trap they’re walking into… or what kind of horrors await them within. 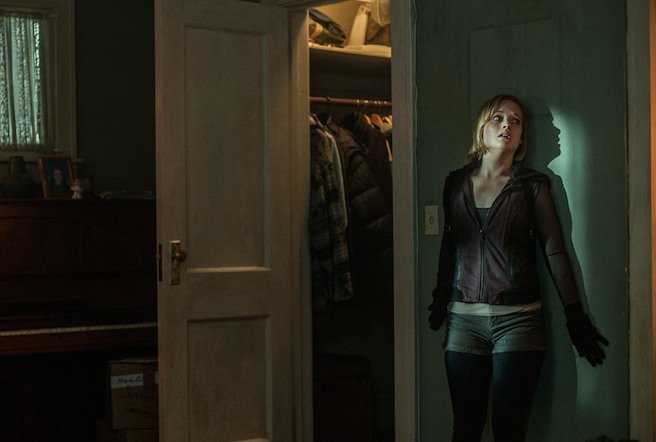 Alvarez does an absolutely amazing job of capturing the dire economic straits and near complete ruin of modern day Detroit, showcasing the many abandoned buildings, crumbling streets, overgrown vegetation, and completely empty neighborhoods that make up a large part of what many call America’s Ghost Town. It’s unsettling, ominous, and downright uncomfortable to watch, which makes for a fantastic setting for a horror film. I do have to question the authenticity of the burgular trio, complete with their very suburban looks, but it’s easy enough to suspend that disbelief, especially once the suspense and terror get underway, which takes no time at all to get going as this film is paced very well. 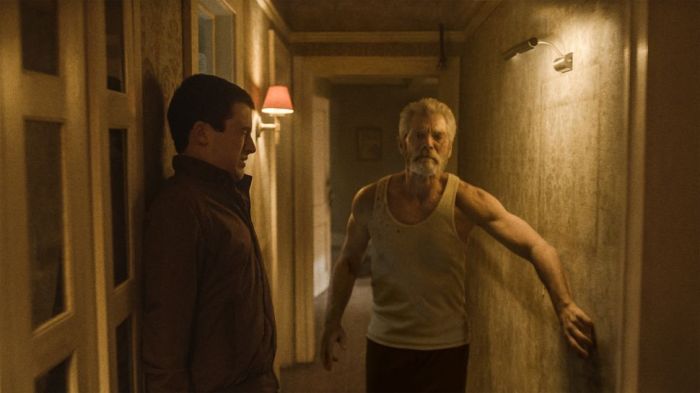 Alvarez relies on old school scare tactics, classic tension building, and just a couple cases of extreme viewer discomfort to tell this story of human greed faced with twisted insanity. Better yet, he does NOT rely on a ton of lazy jump-scares like most other modern Hollywood horrors do. For that fact alone, Alvarez deserves a lot of praise! I won’t mention anything more than that for fear of spoiling anything, and instead will only say that there are a few very effective twists and turns in this one, and a couple of very, very distrubing and even upsetting scenes – which I actually saw some of the thinner-skinned, more sensitive audience members run of out the theater on account of.
THAT is the mark of effective horror, people. And quite frankly, THAT is a far better review than any writer, especially myself, could ever acomplish with some words typed on a screen.

The Bottom Line:
Overall, Don’t Breathe is a refreshing, enjoyable, suspenseful, unsettling, and at times outright uncomfortable film to watch in a genre that’s quite frankly been far too stale for far too long. Despite its rather generic title, which admittedly led this writer to suspect yet another cookie-cutter, paint-by-numbers waste of time, this one will really surprise you. It’s well paced, well executed, and most of all effective. Jane Levy carries most of the story on her back, delivering an outstanding acting performance, and Stephen Lang does a fantastic job of playing a genuinely scary antagonist as well.  Alvarez has recaptured the nearly lost art of good horror storytelling, and casts aside the laziness of jump scares and gore fests in favor of good, old-fashioned suspense, terror, and mood. Highly recommended for all horror fans, from hardcores to casuals, or anyone that just appreciates a good creepy film, or a well-executed one, for that matter. – 8.5/10