Welcome to No Man’s Sky, the largest game universe ever created!

So what is No Man’s Sky you ask? It’s a first person ‘shooter style’ game built upon predominately exploration and survival that is so massive that, according to it’s creators, would take you roughly 5 billion years to explore every inch of the game. Let’s see how this monster of seemingly infinite game play hours stacks up!

No Man’s Sky is played in two settings, the surface of the 18+ Quintilian planets you have the opportunity to visit and the vastness of space that surrounds them. All of the planets are procedurally generated using a system of seeds and algorithms meaning that, just like snowflakes, they are all uniquely created. This also goes for all of the plants, animals, and weather conditions as well (and let me tell you, the animals in particular can get pretty weird). This lends itself to the creation of just about the ugliest and most gorgeous planets you’ve ever visited along with everything between. You won’t find the space around these planets to be nearly as varied but that doesn’t mean you will be bored by any means. With space stations, pirates, battleships, asteroids, and space anomalies there will always be a wealth of activity to keep you entertained as you traverse the the distances between planets. 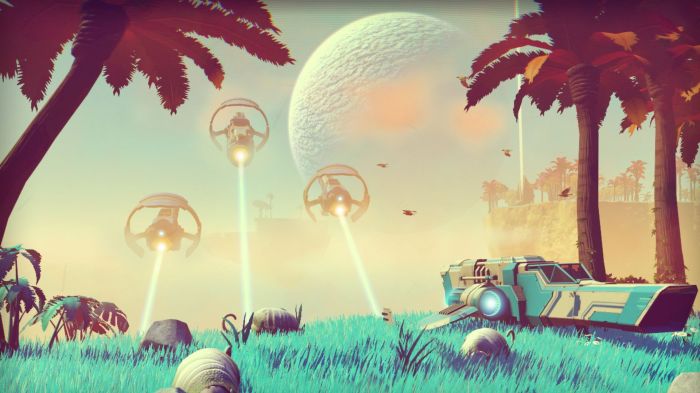 The gameplay will feel pretty natural to anyone who is familiar with the current standards of today’s first person shooters. You are provided with a multitool in the form of a gun which you can use to mine for materials, excavated the terrain around you, and rain unholy death to those that defy your will! As the game begins you will find yourself stranded on a mysterious planet with instruction to repair your ship with the resources found around the planet. Once that is complete, the game presents you with the option to follow a loosely story based path or throw caution to the wind and do your own thing. I personally recommend the story line as it will guide you to some of the vital resources you will need to better your ability to actually play the game and you can ignore the subtle objective prompts whenever you feel like it. Once your ship is up and running its time to fly, and who hasn’t dreamed about flying their own rocket ship out into space to explore the cosmos? The flight controls are pretty easy to pick up as well and in no time you are buzzing around space doing as you please, at least until the pirates show up that is and then it’s a dog fight to the death!

Visually speaking No Man’s Sky is, at times, an interactive masterpiece of living art. The game certainly has its own style that works well with it’s randomly generated worlds and environments. The only time the graphics feel lacking is while entering the atmosphere of planets or traveling across them at high speeds you can see the haze of rendering as the game attempts to generate the landscape. No Man’s Sky offers a multitude of play styles to accommodate today’s diversely growing gamer community. Would you like to be Dr. Spock, meeting new aliens, learning about their culture, and helping them as you proceed to systematically make your way through the universe documenting your every find for the quest of knowledge and enlightenment? Or perhaps you’re more of a Kirk, zooming down to the planet surface with your blaster in hand shooting first and asking questions never! I say why not both, on some planets I am so enthralled with the gorgeous flora and divers fauna that much like Pokemon I “Gotta Catch Em’ All”! And then there are other planets where I just feel like shooting all the things leaving a wake of death and destruction in my wake. There are even some planets where everything is hostile and would like nothing more than to feast upon your warm dead corps like a foreign delicacy that is just out of this world. Even if you’re an accountant who lives and breaths for market prices there is even content that you will enjoy as the game has a diverse trading system you can exploit to maximize your return on sales and purchases. While the game doesn’t have an experienced based leveling system make no mistake, you will be required to better your character in order to advance throughout he universe as everything you use can be upgraded and modified. 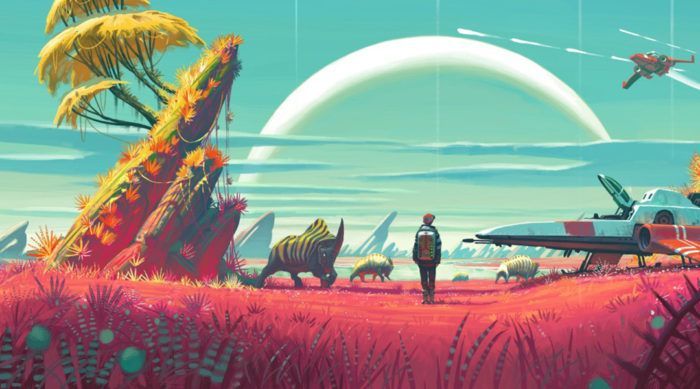 Just like any game, there are ways in which No Man’s Sky could benefit from some improvement. While the planets are typically pretty divers the buildings and structures you find on them are all basically the same. This will unfortunately add an element of mundanity to your visit to every planet and can decrease the drive to spend much time scouring the surface. Also, inventory space is HIGHLY limited and is even further diminished as you play as every upgrade you employ permanently occupies an inventory space. That’s not to say that you cant upgrade your storage space but this becomes increasingly expensive with each additional space. I often times found my self spending what felt like an inordinate amount of time trying to manage my inventory.

The Bottom Line:
In short, No Man’s Sky is an amazing game with an unimaginably large playable universe, literally, with a fun variety of activities that cater to a multitude of play styles. The diverse worlds and engaging environments lend themselves to an endless variety of experiences as you explore the cosmos. Highly recommended. – 8.0/10