Friday, August 5, 2016 marked the official theatrical release of Suicide Squad, the highly anticipated and very, very hyped latest effort from director David Ayer and Warner Bros. new DC Cinematic Universe. Nerd Nation Magazine’s Hannah Collins was in attendance at the early press screening on Tuesday, August 2, 2016 courtesy of Warner Bros., Allied Marketing, and Regal Cinemas, however, thanks to no small amount of technical difficulties/equipment failures (which have since been handled) Dave Harlequin, who was in attendance for opening night, has taken on this one after the original review written by Ms. Collins was lost. So let’s just call this one a co-op, shall we?

But enough about all that, let’s get to the real questions on everyone’s minds: how did Suicide Squad measure up? Did it live up to the hype? Or did it end up being as bad as everyone has already been talking about? Read on to see for yourselves!

Set in the new DC Cinematic Universe (DCCU) following the events of Batman V Superman: Dawn of Justice, Suicide Squad kicks off with US government agent Amanda Waller (played by Viola Davis of How to Get Away With Murder, 14-16) looking to assemble a team of government-controlled supervillains who are currently imprisoned at a remote facility in Louisiana for a top-secret project called Task Force X. The idea of course is that these individuals can be dispatched to handle high-risk operations and if anything goes wrong, they can be blamed while the government denies all involvement.

They’re all fitted with implanted bomb devices that can be detonated at any time if they try to escape, turn on the team, or (one would assume) the ruthless/heartless Waller just takes a notion. The team is joined and led by US Special Forces Col. Rick Flagg (Joel Kinnaman of Robocop, The Killing) and his associate, Japanese assassin with a magic sword Katana (newcomer Karen Fukuhara). If you’re thinking, wow this is a lot of characters, there’s no way they can possibly establish/flesh out all of them! Well… yeah, you’re mostly right. Plenty of backstory is given to Harley Quinn, with only slightly less given to Deadshot, but the rest of them are given very little, and are frankly treated like they’re totally unimportant (particularly the random other guy in the squad who is literally only there to try and run so we can all see how the bomb implants work – you had to know that’s why he was there given that he had absolutely no story) so take it for what it’s worth here.

When a major city is attacked by Enchantress (played by model-turned-actress Cara Delevingne), an ancient and powerful witch who possesses a young woman named June Moon (she plays both roles) who also happens to be Rick Flagg’s lover, her equally powerful mythical brother, and their army of rock-like underling monsters (read: squishy foot soldiers to serve as fodder) Task Force X is assembled and dispatched to take care of it. Meanwhile, The Joker (Jared Leto of Requiem for a Dream, My So Called Life, Fight Club) and his gang are tracking down Harley Quinn, so there’s that as well. Again, if this all sounds like a lot to try and shove into one two-hour movie, that’s because it is.

While certainly not the worst thing DC/WB given us cinematically, it’s a far, far cry from the best. Visually speaking, it’s an acquired taste at best, and outright groan induicing at worst, and the characters left a lot to be desired. Very few of the characters look good, and absolutely everything is given this neon-paint-splattered, overtly/trying WAY too hard forced edginess, early 2000s Hot Topic scene kid look to it. It honestly comes across as a bunch of old guys trying to market to teens without any sense of understanding what teens are actually into these days, especially when you consider that this look/scene/what have you hasn’t actually been a thing in about a decade. 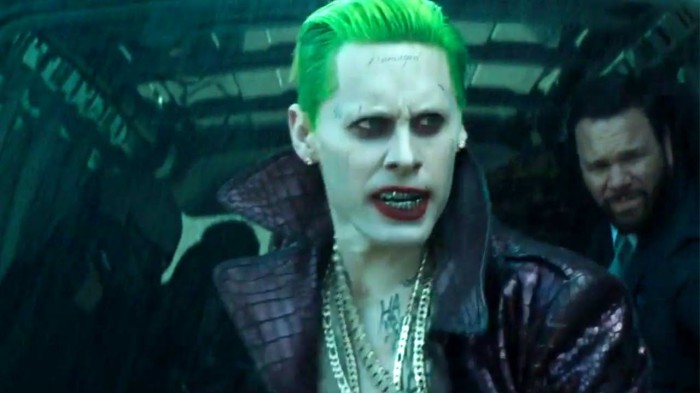 Jared Leto‘s portrayal of The Joker was by far the worst we’ve ever seen in any film, looking like your stereotypical run-of-the-mill “d-bag/f***boy” (if you don’t know what that term means, just look it up) with a “grill” of metal teeth, tons of bad tattoos, and an air of forced edginess that screamed of trying way too hard reminiscent of a teenage mall goth kid trying to act like Heath Ledger‘s iconic portrayal of the clown prince of crime while of course failing miserably. What’s worse is the presentation of the horrible and bizarre past relationship of The Joker and Harley Quinn was completely changed into this boy-loves-girl, do anything to get her back love story rather than the complex psychological, emotional, and physical abuse fest that it actually was. I can see why this was done, but it also takes away the eventual redemption and character growth of Quinn, romanticizes an awful relationship once again, and just as it once did for Quinn when the roles were reversed and she was “just The Joker’s girlfriend”, devalues The Joker by reducing him to little more than a starry-eyed accessory of “just Harley’s boyfriend”. It’s honestly difficult to understand why The Joker was even forced into this movie, considering A: it had almost nothing to do with him, and B: he added absolutely nothing to this film. One can only assume that this was all a producers’ decision to try and market this movie to people who know nothing about comics or the characters of Suicide Squad so they can be like “oooh! hey! I know THAT guy! That’s The Joker!” much like they did with the far-less-marketed Ben Affleck Batman cameos.

Will Smith does a fantastic job as Deadshot, which should come as a surprise to exactly no one given how incredible of an actor Smith absolutely is, although it did come across as more of a Will Smith as Will Smith playing this character, but you get what you get. That’s really just what Smith does, and it works for him. Margot Robbie absolutely stole the show as expected with an excellent portrayal of Harley Quinn, which was helped greatly by the fact that she was given far more time, development, and backstory than anyone else. It was made very clear that she was the central focus of the director in this film, which was great for fans of Harley Quinn, and great for a superbly talented actress such as Robbie, but really hurt the rest of the cast. The rest of the cast? Not so much. Everyone else was basically treated as secondary, with very little development or depth given to them. Killer Croc and El Diablo were both turned into walking stereotypes of the typical “thuggy black guy” and the “Mexican vato loco” respectively, which was pretty offputting, and I would imagine pretty insulting to many black and hispanic viewers. With lines such as “nah shorty” and “esse” (just to point out a couple) thrown in ad-nauseum, it was pretty hard to overlook that this was likely done on purpose. Rick Flagg and the others were about as wooden as wooden gets, so much so that they may as well have been carboard cutouts just stuck in there to help further the plot for the other characters that the director actually cared about. It was more than a little disappointing, and more than a little useless to even have them in the movie if that’s how they were to be treated. 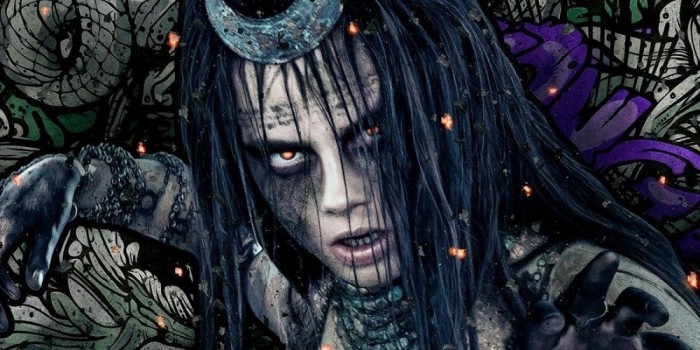 That being said, the main antagonists of the film, Enchantress and company did a fine job with their parts, and were given enough time to develop into understandable, worthwhile characters, the CGI and effects were very well done, and despite all of the writing/character issues, the movie did manage to hold the attention of the audience and keep things fairly action-packed throughout. It was definitely on-par with any other quality superhero action movie you’ve seen as far as all of this goes, which given it’s massive budget, shouldn’t surprise anyone there.

The Bottom Line:
Overall, Suicide Squad was just a mess. Much like BvS before it, it was an overstuffed, overproduced, poorly written, and horribly directed film that managed to skirt by based on a few outstanding performances, fun action sequences, and cool effects. While definitely not the worst DC/WB film out there, it’s a far cry from the best, landing somewhere on the south side of the middle. While I don’t regret watching it once, I’m definitely in no hurry to ever watch it again. I can’t really recommend anyone go spend theater prices to see this on the big screen as it’s just not worth it, but it’s at least worth a Redbox rental or a wait until it shows up on Netflix. – 4.8/10