Welcome to another edition of Comics Corner. For this month, we’re going to hop across the pond and take a little trip to France, where we’ll be taking a look at independent French comic L’invasion Invisible. 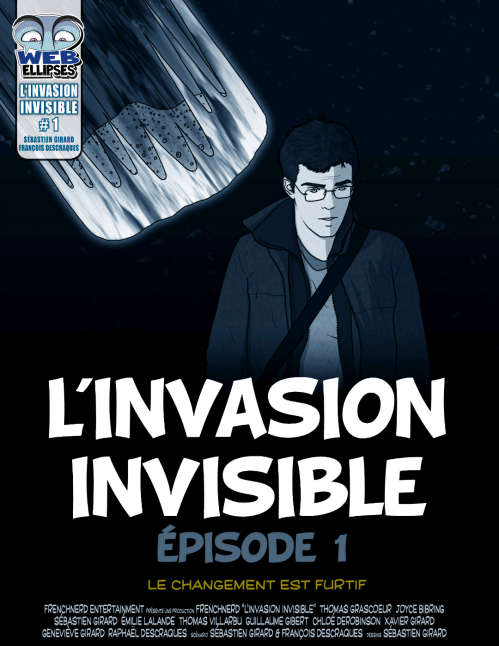 In a comic book world almost entirely dominated by the big four – and particularly the “big two” of Marvel and DC – we here at Nerd Nation always appreciate the little guy, and always give love to the indie publishers out there, too, as many indies can often be great titles as well.

So how does L’invasion Invisible measure up? Read on to see for yourselves!

It all starts with a casual diner among friends. Two couples are enjoying each other’s company when a phone call interrupts the evening. Adrien, the host for the evening, gets an urgent message from his childhood friend to turn on the TV. The two couples continue to eat as they watch dramatic events unfold on the television. A meteorite has crashed outside the town of Cravant and inside the meteor are plants… the first signs ever of extraterrestrial life. The couples continue to watch the news until late in the evening before they call it a night.

The next morning Adrien gets up groggy and turns on the radio to discover no one is talking about what happened the night before. He gets upset and mentions it to his girlfriend, Lucie, who doesn’t seem to know anything he is talking about even though she was with him the night before. As he goes out into the world he discovers everyone he encounters appears to be oblivious and ignorant of the dramatic news events of the previous night. Is Adrien going insane or is something far more nefarious taking place?

This is the set up for L’invasion Invisible (in English: “The Invisible Invasion”), a five-issue comic series by French writer and artist Sébastien Girard. Of the five issues published, three have been translated to English. It is published by the comic distributors WEB Ellipses which is a small French press that also puts out the series Bertrand Keufterian, In Vitro, and Jeanne Dark (to name a few).

L’invasion Invisible is a stark and modestly drawn black and white comic with splashes of gold color to insinuate the alien lifeform. The art style is much more in the tradition of a slice-of-life dramatic comic than a tradition science fiction thriller, but the writing also has that sense as well so the art works with the material extremely well.

The story is obviously an homage to classics like War of the Worlds and Invasion of the Body Snatchers, which have always been a favorite genre of mine. Because of that I really enjoyed these issues. The first issue is a bit slow, and is more about setting the scene than the true web of intrigue the next two books unfold. It is a necessary pace and allows you to connect more to the main character. 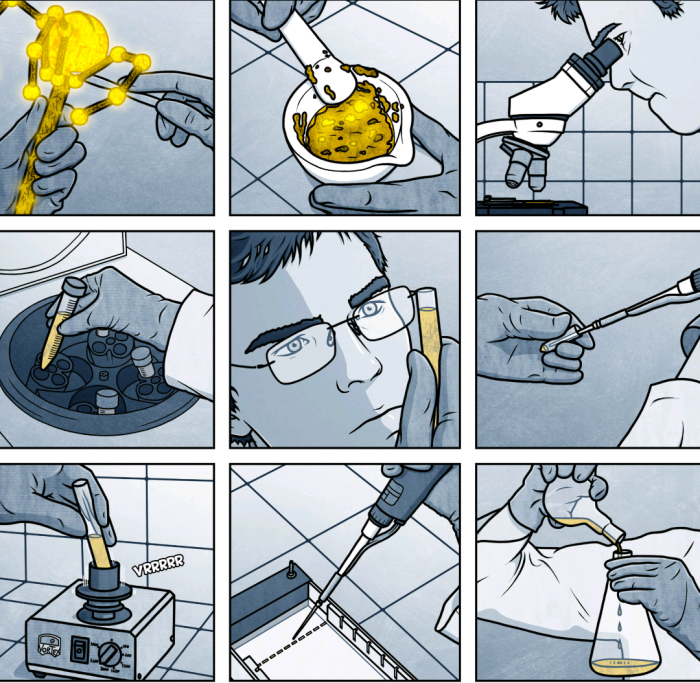 The English translation has its issues in that it appears to be a direct translation by someone whose first language is English. It isn’t unreadable or laughably bad, but at points there are phrases and slang which come across as awkward and stilted. In the first issue, for example, the main character says, “Louise, please. The shortest jokes…” That’s referring to a French saying/proverb “Les plaisanteries les plus courtes sont les meilleures,” which means “The shortest jokes are the best ones.” Even just reading the comic, I gathered what was meant. It would be like “pull the other one” or “knock it off” or “stop f@#king with me.” But to casual readers who didn’t want to bother doing a Google search in the middle of reading the book, moments of dialogue like this could become a bit awkward. I don’t say all of this to discourage anyone from trying out this issues because even with translation issues of idioms it still is a good read.

With only the first three out of five translated so far, I do hope that the last two are translated soon or a friend fluent in French offers to read these comics to me. I strongly believe you should check them out too, and you can as well digitally for free on Comixology. If you do, let us know what you think in the comments section below. And if you speak/read French please feel free to call me and read the last two issues to me. You can just send me a DM on Twitter (listed below) and yes, I’m totally serious!