This month we are going to look at Comixology’s brand new service: Comixology Unlimited. It was launch on May 24th and is the equivalent of a Netflix service (or I think possibly more of an Amazon Prime service) for digital comics. The service currently offers a free 30 day trial and after that it is $5.99 a month. 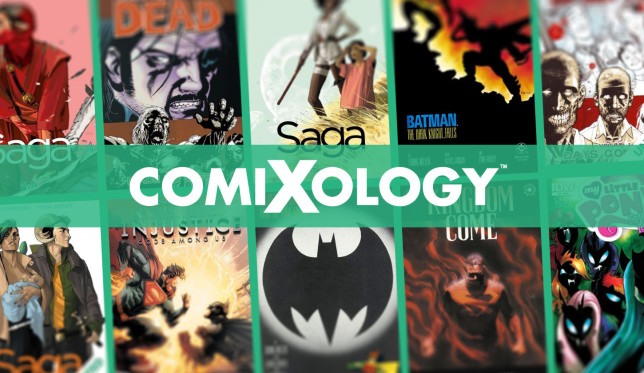 As it is, I’m sure some of you are probably off to the races to try out this new service. But in case you aren’t ready yet, your ever intrepid and generally incredibly cheap ‘Comics Corner’ guru has generously chosen to sacrifice nothing (but potentially his marriage) to try unlimited comics free for thirty days.

First off, for you brave souls who still pretend the end of print media will never come, and thusly refuse to offer a glance at the digital media, my hat is off to you. I was like you, but just as Donald Sutherland in Invasion of the Body Snatchers, I eventually gave in. And again like Mr. Sutherland, with finger stretched out pointing and mouth agape with an unworldly screech, I call you out, and say this service is not for you. Personally, I see digital media as a great psychological tool for comic readers/collectors as I was, mainly due to the fact that I was so OCD over the condition of my comics that I was scared to remove them from the bag and board to give them a read. I was also, as has already been established, incredibly cheap and so the idea of purchasing two copies was ridiculous. Only to those like myself would I actually recommend switching over to a digital service like Comixology, but to the rest of you, keep fighting the good fight! 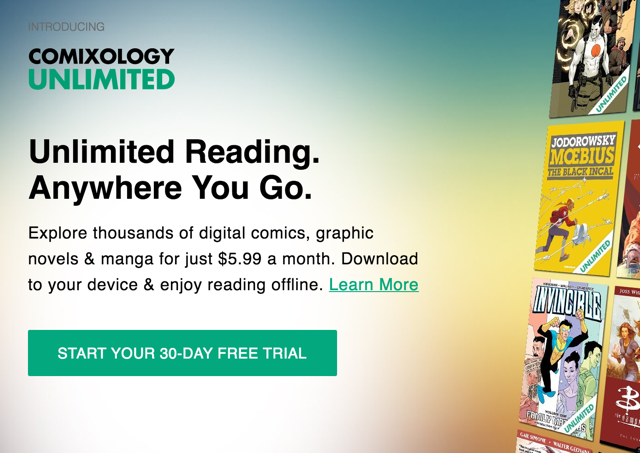 The second roadblock that some may have that’ll make the Comixology Unlimited service pointless for you is that this service (as of yet) offers no comics from the big two: Marvel or DC. Marvel already has their own unlimited digital service (which has a wonderful selection, but mediocre interface), and as of right now DC has no plans for one. I could eventually see some DC titles trickling into this new service, but if you’re quite content never broadening your horizons then this service is pointless for you. But as a bit of a public service announcement, let me tell you that it is okay to enjoy all comics. Comics aren’t sports where you have to be asinine and only applaud one team while putting down all the others as garbage. You can lift something up without having to put something else down. There’s a world of amazing comics from phenomenal writers and artists (most of whom you already love because they’ve contributed to your favorite Marvel or DC books) that you aren’t opening yourself to, and the only person truly losing because of this is you (oh, and the writers and artists who deserve and earn your money).

So now that we’ve established who definitely should not try out this service, those of you left who actually do enjoy digital media should probably know some of the details about the service to see if it is potentially worthwhile for you.

I’ve look through the series offered by this service, and I can say it is amazingly abundant. The extremely vast majority appear to be the first volume (4 to 6 issues) of a series or the first and second volumes (8 to 12 issues). Because of this it is immediately apparent Comixology is trying their hardest to get you hooked to buy more issues from a series. And there is nothing wrong with this, in fact, I applaud their brilliant business tactic. Drug dealers, LARPs, and Telltale Games have been doing this for years, and it works spectacularly well for them. As the saying goes, “the first taste is always free”. Maybe that’s not the best example. For some series this may be annoying. For example, I’m up to issue 126 on Robert Kirkman’s “Invincible” (Impressed? You shouldn’t be.), but only the first eight issues are available on the unlimited service. Because of that, this is isn’t a great service to use to get caught up on your favorite runs, but more to discover new great reads.

The publishers that I’ve seen that have the lion’s share of offerings are Image, IDW, Dark Horse, Boom, Valiant, Oni, Fantagraphics, Archie, and Dynamite.

If manga is your thing, Kodansha also has a reasonable selection available. Just to give you a rundown of some of the series/properties that I saw scanning through (in case publishers mean nothing to you), Bloodshot (Valiant), Hellboy (Dark Horse), Saga (Image), Spawn (Image), Locke & Key (IDW), Turok: Dinosaur Hunter (Dynamite), Green Hornet (Dynamite), Attack on Titan (Kodansha), The Boys (Dynamite), Judge Dredd (IDW), Adventure Time (Boom), Scott Pilgrim (Oni), Irredeemable (Boom), Love and Rockets (Fantagraphics), Red Sonja (Dynamite), and I could really just keep on going. That’s barely a handful of available titles.

So again, this is a great service to discover new reads. For example, the first day I tried this service I downloaded 28 Days Later volume 1, Clive Barker’s Hellraiser volume 1, and Attack on Titan volume 1. 28 Days Later is a good read, and the second volume is also available on the Unlimited service and I’m excited to read it. Attack on Titan wasn’t bad, but it reminded me that I’m just not a fan on Manga in general even as often as I love to use ellipses… And Clive Barker’s Hellraiser is a must-read for any fan of the first two movies. It is brilliantly script and has gorgeous and horrific art. But on that one, volume two isn’t available, so now they’ve suckered me into wanting to buy the next set of issues. And again I say, bravo, Comixology, for giving us all the taste we need to sink the hooks in (a very appropriate phrase to use in terms of Hellraiser).

But finally, how does the service actually function?
Surprisingly well given that it was just launched. On the app and on the website the Comixology Unlimited service has its own section which offers you the tip of the iceberg in terms of available content. Because of this searching by either title (which can be extremely time consuming) or by publishers (less time consuming, but still time consuming) will help you stumble upon hidden gems in the service. And the reason I called it more akin to Amazon Prime than Netflix is because as you search you see everything Comixology has to offer, but titles that are part of the Unlimited service has that word as a banner across their icon. This makes it easy to find as browser their entire library.

Once you found a selection you want to read, instead of a price, as part of the service you see “borrow” in its place. You can click “borrow” and then you will have the option to “download” the book. This is actually a fairly cool idea, because borrowed books show up in your owned books library as well as their own section in your smart list. As far as I’ve seen, I have nineteen books borrowed so far, and that doesn’t appear to be an issue. I haven’t discovered a limitation of the amount you can borrow. If there is a limitation though, once a book is read you can return or unborrow the book like you would at a public library. The one limitation I have found is that you can only download four of these titles from your app at once. That actually seems reasonable, and while I’m sure someone will find a reason to bitch about because of first-world-problems, I don’t think it should hinder your experience too greatly.

The Bottom Line:
This is still a relatively new service, but as it looks I think it could be a pretty nifty way to check out a lot of different series for dirt cheap (or for free for the first month). If you’re like me, even when you try to spend no money on comics, that usually means $20 a month at Comixology and a good portion of that is trying out new series because they’re cheap and on sale. Now for less than a third of that (and less than the price of a cup of coffee a day – jeez, this really does sound like an ad, doesn’t it? – we promise, dear readers, it is NOT) you can try all the new series you want. Sure, it doesn’t have every series and every issue, but for $5.99 a month I really think it is a steal of a price. And beyond that, given that you get your first 30 days free, I can’t recommend enough you give this service a shot.

If you’re interested, head over to http://www.comixology.com right now to start your trial. Just remember – LIKE ALL FREE TRIALS, YOU HAVE TO CANCEL IT BEFORE THE FREE TRIAL ENDS OR THEY WILL AUTO-CHARGE YOU! – Again, this is not an ad, Nerd Nation does not do those types of “articles”, we’re just telling you about this, and wouldn’t ever want our beloved readers not fully understanding what a “free trial” actually means.

If you try Comixology Unlimited out and find an issue that I didn’t discover, please let us know in the comments section! See you all next time on Comics Corner!