Picking up roughly one year after the events of Avengers: Age of Ultron, Captain America: Civil War – the third Captain America film, and thirteenth film in the interconnected Marvel Cinematic Universe (MCU) – kicks off following a battle in Lagos, Nigeria between The Avengers and a terrorist group led by Crossbones/Brock Rumlow (played by Frank Grillo of Captain America: Winter Soldier and The Purge: Anarchy). Although victorious, there was once again several innocent casualties and a massive amount of destruction left behind. Back at Avengers HQ, US Secretary of State Thaddeus “Thunderbolt” Ross (William Hurt of Children of a Lesser God) informs the group that the United Nations has voted to pass the Sokovia Accords, to establish an international governing body to monitor and police the rapidly-growing superhuman population.

Once the initial team sides were established, we are quickly treated to a slew of new and returning characters (all of which are seen in the trailers, thus none of which are spoilers!) including Bucky Barnes/Winter Soldier (Sebastian Stan), Clint Barton/Hawkeye (Jeremy Renner), and making his first Avengers appearance Scott Lang/Ant Man (Paul Rudd) come in to flesh out “Team Rogers”, while brand new characters T’Challa/Black Panther (Chadwick Boseman of 42 and Get On Up), and Peter Parker/Spiderman (Tom Holland of The Impossible and In the Heart of the Sea) round out “Team Stark”. Notably, both Thor and Bruce Banner/The Hulk are missing in action for this one – a fact addressed many times throughout the film. 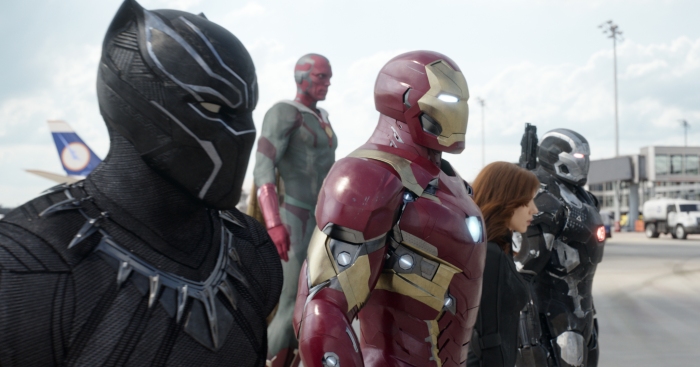 Got it? Okay, good! So back to the review!

Obviously, from the trailer we all know the big hero-on-hero, ‘Avengers vs. Avengers’ battle is coming, and it does… and it is fantastic!   But this is a 100% SPOILER FREE review, so that, ladies and gents, is ALL I will say about it! There is also A LOT more going on here, but for fear of the aforementioned spoilers, I won’t even address it. I’ll just say go watch this movie and find out for yourselves!

As one would expect from any Marvel Studios film, this was an absolute thing of beauty from a technical standpoint. The cinematography, score, and visual effects are absolutely top-notch and the pacing, editing, and all that stuff is on-par with, well, every other MCU we’ve seen. It’s become the standard here, so I won’t go on about that, but it simply can’t be overlooked, as it is really good. The cast all does a fantastic job as well, which is also not at all surprising given the quality of actors and excellent chemistry they all share, particularly Chris Evans and Robert Downey Jr. continuing to expertly play off one another while going at it as leaders of their respective sides.

THAT SAID – Tom Holland absolutely steals the show as what is (at least in this writer’s humble opinion) undoubtedly the BEST cinematic representation of Spiderman to date. Directors Anthony and Joe Russo, along with screenwriters Christopher Markus and Stephen McFeely really captured the witty personality, wisecracking attitude, and general all-around vibe of everyone’s favorite web-slinger, and Holland brought it to life in his breakout role.

The Bottom Line:
Overall, Captain America: Civil War is just an outstanding superhero film. It succeeds in nearly every way that its DC counterpart Batman V. Superman: Dawn of Justice failed (you can read more about that in the full BVS review HERE) and really shows exactly how to do a big, packed-cast, hero-vs-hero-style comic book film the right way. It makes the most out of its 147-minute runtime – letting everyone get their stuff in, but also keeping up with the right pace throughout, and most importantly, keeping it FUN for audiences. And honestly, that’s all anyone really cares about in a superhero film, isn’t it? Simply put, this is an excellent movie – not exactly the best Marvel film ever, but definitely in the top three or four. Go see this one, folks. You won’t be disappointed. – 8.5/10