Often overlooked in the hoopla over the upcoming film Batman vs. Superman: Dawn of Justice, is the fact that 2016 marks the 75th anniversary of one of the most important milestones in the Man of Steel’s history, the debut of his first animated film, Superman (a.k.a The Mad Scientist) produced by Max Fleischer’s animation studio and released by Paramount Studios. Let’s take a look back on this very important part of nerd history!

Max Fleischer, and his brother Dave are often regarded as two of the greatest and most important animators of the 1920s and 1930s. Often considered to be Walt Disney’s only rival, they created the character Betty Boop. They later acquired the rights to the comic strip Popeye and turned the title character into the biggest animated star of its day. Sometime in 1941, their distributor, Paramount Pictures approached them about doing a series of shorts based on a recent comic book character that was taking the nation by storm-Superman created by Jerry Siegel and Joe Shuster.
Believe it or not, they were not keen on the idea. The brothers were working on a feature film, Mr. Bugs Goes to Town (a.k.a. Hoppity Goes to Town) as well as their usual allotment of cartoon shorts. In other words, they were stretched thin. However, the Fleischers were not really in a position to say no. They had recently moved their studio from New York City to Miami, Florida. Furthermore, the brother’s first full length feature film, 1939’s Gulliver’s Travels, their costliest project to date, had only been a modest box office success. Consequently, the brothers were in deep debt to Paramount, and had to put up their studio as collateral.
Legend holds that Dave Fleischer, who was (often incorrectly) credited as director on every film his brother Max produced, told Paramount that the propose project would be impossible to make and not cost-effective because of the special effects and realistic animation it would require. When asked how much it would cost, Dave Fleischer made up a figure of $100,000 per short (about $1.6 million today) at a time when the average full length movie cost one million dollars to make.
Dave hoped that the price tag would discourage Paramount from doing the films. However, much to the brother’s surprise, Paramount went into negotiations, settling for $50,000 for the first short and $30,000 each for the rest. By comparison, the Popeye shorts cost $25,000 each. One reason for the higher price tag is that the Superman series would be done in color.
The money was well spent. Director Steve Muffatti (listed in the credits as only an animator) and the Fleischer artists made meticulous model sheets to capture the exact look of Superman, Clark Kent and Lois Lane from the comic book. Though some rotoscoping was used, most of the animation was done by hand. But before the first drawing was made, each short was carefully planned out to account for camera angles, lighting and shadow effects, and what would be in the foreground and background. In addition the characters were given facial shadows, decades before the technique became a fixture of graphic novels and anime. The finished product had a film noir/art deco look and feel and remains to this day one of the most realistically hand drawn animated films of all time.
Although Bud Collyer and Joan Alexander reprise their roles as the voices of Clark Kent/Superman and Lois Lane from the Superman radio program, dialogue was kept to a minimum, placing a greater emphasis on action and visuals. Most shorts would start with Clark and Lois being sent to cover a story. Lois by hook or crook, would undermind Clark’s efforts to cover the event while at the same time getting herself in trouble. Clark changed into Superman, and saved Lois and the day. Most shorts ended with a brief bit of dialogue between Kent and Lane, ending with a fade out of Kent giving a knowing nod or wink to the audience. Superman also introduced elements that would become a part of the character’s mythos. The short featured the first utterance of “Up in the sky, look! It’s a bird! It’s a plane! It’s Superman!” Also debuting was the saying “Faster than a speeding bullet! More powerful than a locomotive! Able to leap tall buildings in a single bound!” Jay Morton was the uncredited creator of those now famous words which have been reused in subsequent film, television and animated adaptions of the superhero.

But the biggest impact the Fleischers had on the Man of Steel was giving him the power of flight. Originally Superman could only jump really high (hence the “ability to leap tall buildings at a single bound”). But after a test reel of Superman just jumping made the hero look ridiculous, the Fleischers asked DC Comics if they could make him fly instead. DC agreed and gave him this power in the comic books as well.
Superman was released on September 26, 1941 and given an unusually strong promotion campaign for a short feature, and was a critical and commercial success. It was nominated for the 1942 Academy Award for Best Animated Short, losing to Disney’s Pluto cartoon Lend a Paw.
The brothers would go on to make eight more Superman shorts. But in January 1942, in a still-controversial move, Paramount called in their debts on the Fleischer Studios. Hoppity Goes to Town had been a box office failure. (In fairness, it was released the same week the Japanese attacked Pearl Harbor.) And the brothers were now feuding. Consequently, the Fleischers were forced out of the studio they had founded.
The studio was renamed Famous Pictures, based on the original name of Paramount, Famous Players, with three Fleischer veterans, Sam Buchwald, Seymour Kneitel and Izzy Sparber (the latter two, were legendary animators in their own right and the real directors of a number of Fleischer shorts) in charge of the studio. 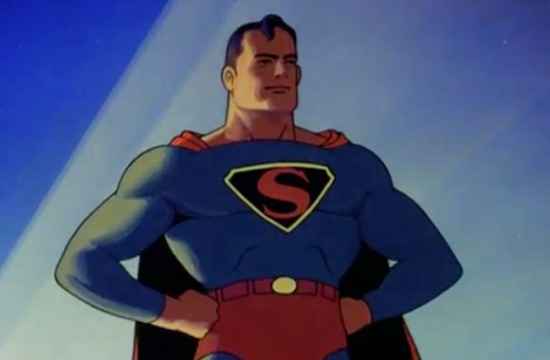 Under the Famous name eight more shorts would be released in 1942 and 1943 (though these are often lumped together with Fleischer’s.). While the technical quality of the shorts remained high, the stories changed. Instead of just fighting giant robots, monsters or saving the world from wayward comets, Superman was now fighting spies, saboteurs, and the Axis powers. Unfortunately, many of these World War II era films feature racial stereotypes that can be difficult to watch today.
The introduction changed as well. The shorts now started out with “Faster than a streak of lightning! More powerful than the pounding surf! Mightier than a roaring hurricane!” The 17th and final short Secret Agent was released on July 30, 1943.
Eventually, the rights of the shorts were returned to DC Comics, who later licensed them to Flamingo Films, the distributor of the 1950s Superman TV series. However, when DC failed to renew the copyright sometime in the 1960s/1970s they fell into the public domain and were all but forgotten until 1978’s Superman: The Movie. Then the shorts started enjoying a revival at film festivals and in some places they were shown before the screening of the film. The boom in VCRs and cable t.v. in the 1980s help further the popularity of the shorts. In 1994 a poll of 1000 animators placed Superman, 33rd on the list of the fifty greatest cartoons of all time.
While they may have been forgotten they played a major role in the evolution of Superman as he is today. The 1950s television show started out with the same catch phrases as the cartoons, with similar sounding theme music. George Reeves’ Clark Kent looked almost identical to the Fleischer’s take on the character. Not to mention the show ended with the same kind of banter that the shorts used. The Christopher Reeves’ Superman films of the 70s and 80s ended with Reeves’ Superman smiling into the camera, also similar in some ways as to how the Fleischer shorts ended. Furthermore, the colors of the Superman costume worn by Zack Snyder in 2013’s Man of Steel is similar to the Fleischer’s color scheme of the same.
Interestingly, the shorts have also had a major influence on Batman. Frank Miller has said the Fleischer films were an influence on his classic 1986 graphic novel, The Dark Knight Returns. They also influenced the highly acclaimed Batman-The Animated Series of the 1990s which successfully recreated the film-noir look and color scheme of the Superman shorts.
Neither Max nor Dave Fleischer will receive any screen credit in this spring’s blockbuster, but without them, Batman vs. Superman would have been a lot different.
Author’s Note: Because the shorts are in the public domain, they can be found on numerous cartoon packages on DVD with varying degree of quality prints. They can also be seen on various websites across the internet.
The best DVD collection and packaging to date is Max Fleischer’s Superman: 1941-1942 released in 2009 by Warner’s Home Video. The set includes all the shorts made from the original masters which are now owned by Warner Bros. Studio, as well as two documentary features.  In addition, Warner has made the shorts available for download on iTtunes.
.
-Tom Elmore
Staff Writer/Chief Historian: Nerd Nation Magazine
@NerdNationPress