With the dramatic and record-shattering successful first weekend of the Deadpool movie there are going to be a lot of fans jumping on board wanting to read all about Marvel‘s favorite Merc With a Mouth. That’s wonderful! There are so, so many excellent Deadpool stories in the comics, and I for one am hoping that you want to actually read these stories and learn more about the character instead of just buying a cornucopia of variant cover issues that he appears to be on.

Does that sound bitter? Well, I do apologize. As a fan of comics, and more importantly of reading comics, I get a tad bit impatient with marketing ploys in comics that aren’t related to the actual stories and characters… but, I’m pointlessly ranting now. I’m sorry. Let’s get back on topic with helping you discover the absolute best there is to offer in terms of Wade Wilson.  Whether you’re a new convert coming over from the fantastic Deadpool movie, or if you’ve not been around in a while… here’s a great list of some selected gems.

First, you should start at the beginning.

There is a fantastic trade collection called Deadpool Classic Volume 1. This can be found in both digital and physical formats, and it includes Deadpool’s first appearance in New Mutants #98 (which I don’t think is that great, honestly) along with Deadpool’s first two miniseries, one by Fabian Nicieza (if you see me in public never ask me to pronounce that name!) and the other by Mark Waid, and then issue one of Deadpool’s first ongoing series by Joe Kelly. What this book helps you see is the foundations of the character that becomes the Deadpool we know fairly quickly. You probably won’t recognize D-Piddy in New Mutants, but as the Deadpool Mini-Series advance you’ll quickly begin to recognize the character you saw on the screen and then Joe Kelly’s first issue will be the ‘eureka’ moment for you. The art in these issues are some of the greatest artists from the 90s which really just helps solidify how much fun these books are to go back and read.

Second, you should understand the Deadpool-Cable Dynamic!

While you could (and definitely should) definitely keep going with Joe Kelly’s Deadpool run, I’m going to skip ahead a bit to cover another era in the character’s history.

Cable & Deadpool Ultimate Collection Book 1 is the next purchase you should make which contains the first 18 issues of the Cable & Deadpool series. While you can get all of these issues digitally, this collection is only available as a physical trade. If you think it costs too much money, just go with Volume 1 of Cable & Deadpool. Also a quick note is that this series in reprints is actually referred to as Deadpool & Cable, but don’t let that confuse you. It’s the same series, just marketing trying to lead with the most popular name forward. This series follows Deadpool, the most insane “hero” in the Marvel Universe, alongside Cable, who is one of the most stoic military characters in the Marvel Universe. So it is basically the “Odd Couple” as a comic. This was written by Deadpool and Cable’s co-creator Fabian Nicieza. The art shifts but for the most part is extremely strong in this series. Each issue is typically a quick read, but really solid. Also, the current rumor is this may be the set up for the next Deadpool movie, so get a leg up by reading this fantastic collection. It’ll probably make Deadpool 2 even more enjoyable for you!

Third, Let’s get into some Monkey Business!

Next, we’re going to jump forward to possibly my favorite era for the Merc With a Mouth and recommend Daniel Way’s Deadpool second solo series.

Now this one may be a bit difficult to get into for a novice due to the strong continuity tie with the rest of the Marvel Universe. The first story arc deals with the Secret Invasion event, the second arc with the Dark Reign storyline, the third is a crossover with the super-villain team called the Thunderbolts, and the fourth deals with fallout from the X-Men Schism event. So those might not be the best to throw you into. But the fifth volume (often listed as the forth due to the Thunderbolts crossover) of this series is entitled Monkey Business (available digitally and physically) and guest stars Spider-Man and Hit-Monkey, yes, a monkey who is a hitman. The series from that point on, while it does intersect with main Marvel storylines is much easier for a novice reader to follow. The important thing to note in this series is that Deadpool is schizophrenic and has two inner voices he regularly talks to. They’re an angel and demon on his shoulder basically, but it really creates some of the best Deadpool humor that I personally think has been written. The series is especially strong for the most part after that and the arc where Deadpool falls in love with Death and goes after to the Hulk in hopes of permanently killing himself is really a wonderfully dark and funny volume.

Fourth, I’m going to jump out of the main Deadpool series and recommend Wolverine: Origins Volume 5 (available in both digital and physical).

All you really need to know is that Wolverine has his memory back, and he has a long lost son who hates him. The rest of this story is basically about how psychotic Deadpool is and how much damage both he and Wolverine can take. This was written by Daniel Way and drawn by fan favorite Steve Dillon (of Preacher and Punisher MAX fame – which are both also excellent reads) so it is really about as violent as a book gets without a parental advisory label. The opening three pages on this book are really all you need to read to know whether or not you want to read this book. The immediate jokes from page one are a bit on the corny side, but genius in a way that only Deadpool can really make them. Again, like Daniel Way’s other Deadpool series, he’s schizophrenic so don’t let that confuse you when reading this volume. Also, this is a great series showing how Deadpool isn’t a hero or a character for children. This book should be mandatory reading for any idiot angry about taking their kid to see an R-Rated movie. The non-stop joking from Deadpool and the brutal violence of this series are probably what you want and maybe expect after seeing and loving the movie yourself.

Finally, take it to the MAX! 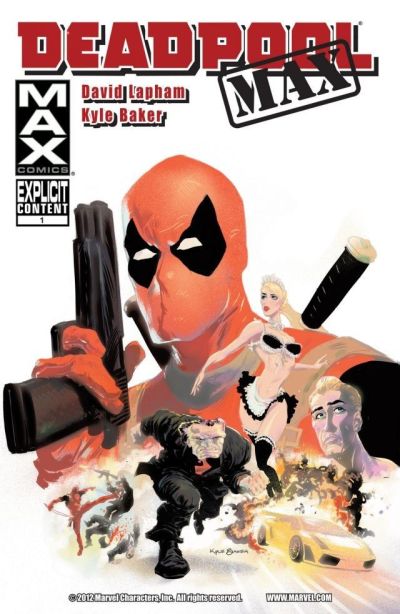 Fifth and finally, if you really liked the heavy R-Rating of the movie then I’m going to recommend Deadpool MAX (digital and physical).

This is really the first and one of the few actual Deadpool series written for adults. It is written by David Lapham who is probably best known for his series Stray Bullets. I’m not going to go out on a limb and say this is one of the best Deadpool comics ever written, but in the pure adult nature of the film is what made you really excited then I would recommend this series. It isn’t a bad read by any stretch of the imagination, but it isn’t one typically cited as one of the all-time greats. But if you enjoy it, the first series is 12 issues and a Christmas special and the second series is six issues. So there is plenty to read and have fun with this character in another adults-only setting. One of the more enjoyable things about this series is that if you have some knowledge of the Marvel Universe there are a lot of references and cameos that you wouldn’t expect to see around this type of material. So again, not for everyone, but maybe for you.

And those are my recommendations to the newly indoctrinated fans of Deadpool.
I really do hope you enjoy them, and I wouldn’t recommend them if I didn’t think you would. Let me know what you think if you check any of them out. And if you’re a hardcore Deadpool fan and you think I missed an important volume in this mercenary’s many escapades, let us know in the comments section below!