2016 is starting out with a bang!  Days of the Dead: Atlanta, as they’ve done so many years before, welcomed the Nerd Nation with open arms… and they certainly did not disappoint!

I have a good many friends in the Atlanta area, and it’s also where I get my tattoo work done.  So naturally, anything convention-wise in the area means I am there.  Friday started out with getting my two con-rookie friends Laura and Ed (at their first real con ever) situated and on the road; this went as well as it could with two people that have never done this sort of thing before, add in the typical Friday Atlanta traffic and we were naturally a few hours later than I personally wanted to be. Since I was going to be in Atlanta, I set up a tattoo appointment for Friday evening, and was thankful that my artist also had been a tad backed up. We get checked in to the Hampton Inn, offload our crap, take a smoke breather, then hop back in the car and up to Marietta and Psycho Tattoo. I get inked for three hours while Laura and Ed kill time by going to Big Lots for supplies that they thought they would need for the next day and a half away from home.  After all this, we completely missed the first day of the con.  Sorry Adolfo!

Saturday started early.  Ed’s phone had a goof and it woke us all up around 7 am, after that I couldn’t go back to sleep, so off to breakfast and to try and plan the day.  I get ready and off to the con, while Laura stays behind to dress up; the hike was a brisk three-block walk in the morning cold.  Getting to the Sheraton Downtown, there isn’t any real directional markings showing where the convention was at, so I found the closest guy wearing all black and a weekend pass, and he happily told me where registration was.  I  get to the convention level, and naturally it’s Saturday, so the crowd has already formed.  I get my press passes with no issue, then take off into the ballroom starting to scope out where all the celebs are sitting and to plan out interviews.

Ted Raimi is the first one I spy just walking in, to add to the scene, I am wearing a ‘Polite As F**k’ t-shirt.  I walk up to Raimi, he immediately notices the shirt, and confirms that’s what he is indeed reading.  I profess my love for all things Evil Dead, and thank him for bringing Ash back, baby.  I buy an autograph and then ask for an interview, which I get a polite decline (as often does happen to us on Saturdays at cons, when celebs are trying to sell stuff), but he took my Nerd Nation info, so there is that.  I walk over and find Tony Todd, get a pic with him, and set up a talk time for Sunday.  Since no one else is around that I wanted to talk to, I go out and start walking around the rest of the con, which is not very large, but that’s ok, I’m not a fan of super large cons.

Entering the dealers room, I spot the registration for the “That Damn Tattoo Contest” and proceed to enter my Captain Stab-Tuggo piece I have been working on, and next door was a lovely woman selling awesome snacks calling it the Darkside Bakery, and naturally being hungry already, I bought a few, and I will say that home made always wins!  I continued walking around and parusing all of the shops and people with wares to peddle, and there were some damn fine ones indeed.  The Horror crowd really goes all out.

I came upon Robert Mukes and his lady, they recognized my tattoo and mutual friend, so that sparked a 10-minute conversation that led to me getting his interview.  After this I moved along and found both Sid Haig and Bill Moseley sitting with each other naturally, I got those interview times squared away; by this time it was almost 2, had not heard anything from my cohorts, and decided I needed a break.

Later that evening I met up with Sonya Thompson and got a quick couple of minutes with her before hooking up with Chris and Elaina Steele, AKA Captain and Maybelle and hitting the tattoo contest.  The people that entered the contest had some mind blowing work done, and I was a little intimidated that I might not have stuff that rivals theirs.  Boy was I wrong, I ended up taking best portrait, of which I am still over the moon about.

After the contest, we proceeded to enjoy more than a few adult beverages and getting stopped every 5 feet to talk to folks, which isn’t all bad when you’re drinking with celebrities that are also your friends.  I got to witness a drunken T-Rex costume power bomb..and that’s all I really have to say about that.

Sunday rolls around and of course everyone is hungover, or in some sort of foul mood, as is usually the case on Sunday.  I finish with my interviews and then observe Laura at her first attempts at interviewing.  Everyone was very nice and accommodating with exception of Chyna‘s handler.  Chyna herself was very nice, and apologetic to the situation, first off.  Secondly, it really pisses me off when a handler does not let the celebrity speak for themselves on things.  Laura quietly approached Chyna, and in mid-sentence was cut off by her handler, whom then in a very rude and quite asinine manner, “explained” that Chyna doesn’t get asked anything, or spoken to, unless it’s approved by him first..  Even after Laura apologized, the guy kept on about how she needed to learn how to approach people, when she had already talked to other celebs that were extremely friendly and talked with no problem.  I will reference back to a Negative Space article I wrote last year on convention atrocities, and this is a perfect example of that.  Don’t speak to the celeb unless it’s approved and you plan to spend money.  Not Cool at all, pal.  This is of course no fault of Days of the Dead, or anyone else in attendance, quite the contrary, this convention was fantastic, and I can’t wait to go back next year.

Overall, another fantastic year from Days of the Dead, who have gotten quite good at the whole horror-show thing. These folks do cons in a lot of different cities each year. If they do one in your city, or one close to you, and you’re a horror fan, do yourself a favor and go check them out!  In the meantime, check out a few assorted photos from the event. 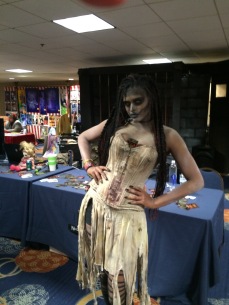 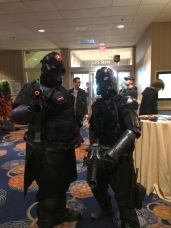 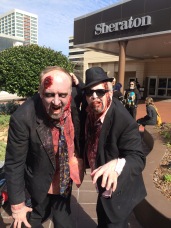