The Coen Brothers return to the silver screen with their latest film: Hail, Caesar! out now in theaters everywhere. The comedy/crime tale sports an all-star cast, and has quite a bit of hype among film geeks out there, as one would expect from any Coen Bros. film. 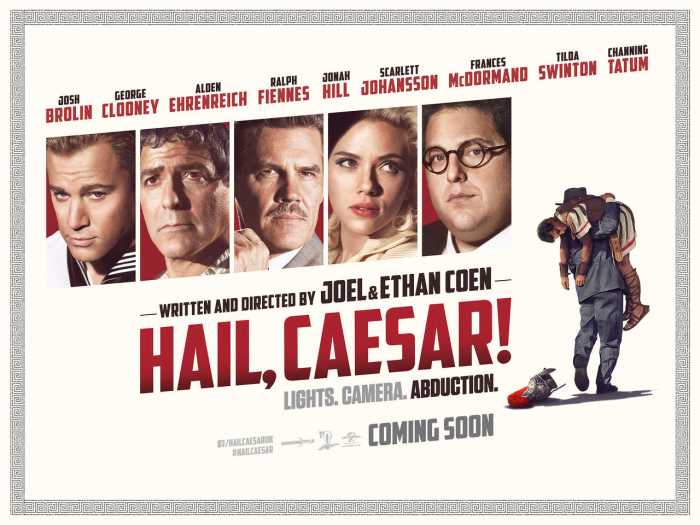 But how did Hail, Caesar! actually measure up? Read on to see for yourselves!

First of all, there are way too many characters to even bother listing them all. Suffice it to say, the most important one is Eddie Mannix, played by Josh Brolin (Everest). He’s an overworked studio executive who’s trying to hold together the studio he’s working for, the insane casts for various productions, and his own personal life. You’ll feel sorry for the guy, and maybe for some of his stars, fairly early on.

This will probably be one of the few movies where I will say; it just needed more. More to the various stories, that is. There’s a lot going on, but we only get snippets of each story. Only the main story is fully developed, the part with Baird Whitlock (George Clooney, Oh Brother, Where Art Thou?, Tomorrowland) getting kidnapped. The rest of the various stories are little more than a distraction. Scarlett Johansson’s (Ghost World, Avengers: Age of Ultron) character DeeAnna Moran is barely in it, she gets five minutes more than Jonah Hill’s character (True Story). I was disappointed that they weren’t in it more. Equally disappointing was the lack of time dedicated to the Burt Gurney (Channing Tatum, The Hateful Eight) story line, since he is supposed to be the instigator behind the kidnapping of Whitlock, yet, he’s only in it for a song and dance, and then he’s leaving on a Russian sub. I think they could’ve done more with his character.

The Bottom Line:
Overall, Hail, Caesar! wasn’t the best offering from the Coen Bros. by any stretch, but it wasn’t bad, either. The cinematography and technical aspects were top-notch, but it just felt like there just wasn’t enough there as far as an actual movie goes. You have this huge all-star cast, I think the Coen Bros. could’ve done a lot more with them. The movie could’ve been another thirteen minutes long with fewer, or shorter, musical numbers and more character and plot development. I got most of the movie references, though I don’t personally know of many people who will. You would have to watch the movie at least half a dozen times to get all of them. Personally, I loved it. I just wished there had been more to it. – 7.0/10 (give me more and I’ll give you more)