To start out with, it’s a Quentin Tarantino film. That being said, it was about what I expected. No real good guys, every one of them is so full of flaws you find yourself not really able to get behind them. As for the bad guys, only one of them is identified at the beginning, Daisy Domergue (Jennifer Jason Leigh). 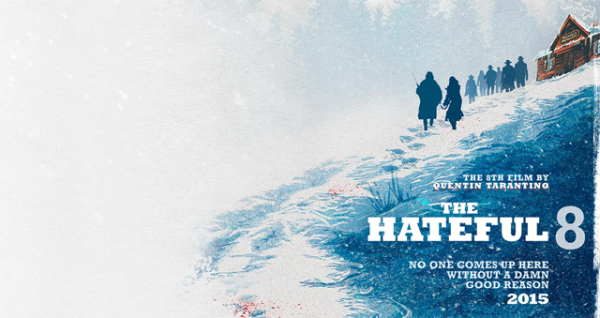 Let’s get into it. The start of the film is classic western. Six horse stagecoach tromping through the snow (it did come out just after Christmas) to some very loud old music. We don’t know who’s inside, yet. Insert Samuel L. Jackson standing in front of a stack of bodies in calf deep snow just before a blizzard is about to hit. Oddly enough, Major Marquis Warren (Jackson) happens to know one of the occupants of the coach. Cue Kurt Russell as bounty hunter John Ruth. He’s taking a prisoner to hang, and here we meet Domergue all trussed up in fur and chains. After a random discussion between the pair, Jackson, and his stack of bodies, join them on the coach. There’s a bit about a Lincoln letter that was written to Warren during the war, then, silence just before we run into the soon to be sheriff of the town they happen to be traveling to, Chris Mannix (Walter Goggins of FX’s Justified). I’m still trying to figure out how he ended up in the snow in the mountains of Colorado (shot on location so you know the cast freezing their backsides off is authentic). Another bit of bickering and the crew is on its way to Minni’s Haberdashery which happens to be between where they are now and the town they won’t make it to before the blizzard overtakes them. Convenient.

A little more tromping through the snow and the not so friendly travelers find themselves at Minni’s where they’re greeted by Bob (Demian Bichir, The Heat). Warren and Mannix help Bob get the horses put away while Ruth and Domergue head inside to meet the rest of the main cast. Of course there’s a secondary cast, but they’re more of a side note so I’m leaving them out of this review. The first new person is Oswaldo Mobray, the hangman of Red Rock (Tim Roth of Pulp Fiction and Inglorious Bastards). He warmly greets them and introduces some of the others. Next is General Sandy Smithers (Bruce Dern of Django Unchained) a retired southern general who’s in Colorado to oversee the making of his son’s tombstone. The last is Joe Gage (Michael Madsen of Kill Bill 1&2) who says he’s going to see his mama for Christmas.

The question is, murder! Oh, wait, kind of the wrong movie. This movie is full of questions. Where’s Minni? What brought all of these random people to Minni’s in the middle of a blizzard? Are any of these people working with Domergue? Did Warren really have General Smither’s son suck his dingus?

The Bottom Line:
Like I said to start this review, it’s a Quentin Tarantino film. If you like Tarantino films, you’ll love it… if you don’t, you won’t. Simply put, if you’re expecting a happy Disney ending, you’ll be sorely disappointed. If you’re expecting randomness and Kabuki style blood mixed with a spaghetti western, then, this will be your kind of movie. I liked it well enough, but I would’ve liked to have seen Tarantino in it since I think his quirkiness would’ve lent to the film. It’s no Pulp Fiction by any stretch of the imagination, but it’s not bad, either. – 8.5/10