Arguably, next to the release of Star Wars: The Force Awakens the most anticipated holiday movie event this winter has been the BBC’s Sherlock Christmas (well sort of, being that it was released January 1st) Special: The Abdominal Bride. 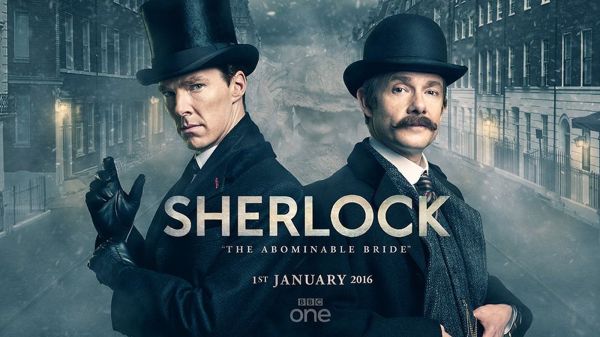 Having successfully taken Sir Arthur Conan Doyle’s brilliant and eclectic detective and his faithful companion Dr. John Watson out of Victorian England and into the 21st century, the question was could they effectively reverse the process. The answer is a resounding yes.
The script borrows elements from the stories A Study in Scarlett and The Five Orange Pips. It also borrows from a third tale that this reviewer will not mention for doing so would give away too many spoilers (though most Sherlockians will easily figure it out), with a subplot that seems lifted from Disney’s Mary Poppins. Holmes is called in by Inspector Lestrade to investigate the strange murder of Mr. Ricoletti who was shot and killed by his wife in broad daylight, who afterwards shot and killed herself. The problem is that Mrs. Ricoletti was seen blowing her head off earlier in the day and was already declared dead at the time of her husband’s death.
Then fast forward several months later and Holmes and Watson are called upon by Lady Carmichael to investigate the strange happenings involving her husband Sir Eustace Carmichael who received a mysterious envelope containing five orange pips and has been visited by a woman who looks like the late Mrs. Ricoletti and is in fear for his life. Soon Holmes suspects a familiar adversary maybe involved.
Saying anything else would give away too much of the plot, but midway through the show series writers/creators Mark Gatiss and Steven Moffat throw in a totally unexpected plot twist, that nonetheless makes full sense. 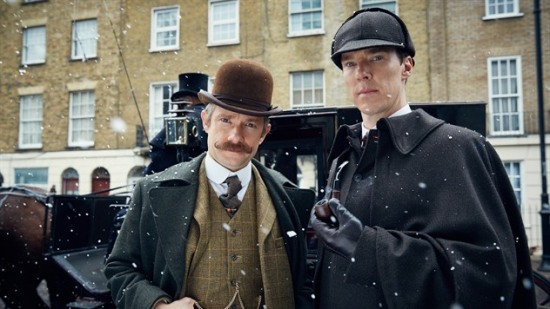 The sets and atmosphere truly set a 19th century mood. Sharp eyed Sherlockians will find several “Easter eggs” throughout the show, including the live action recreation of one Holmes’ illustrator Sydney Padget’s most famous drawings. The acting is up to the usual fine quality and it is entertaining to see the characters we have come to know over the last five years modern times being just as comfortably set in Victorian times; in particular Gattiss playing the role of a morbidly obese Mycroft Holmes as Doyle described the character. Una Stubbs has a brief but memorable performance as an angry Mrs. Hudson who feels slighted that Watson has not mentioned her more in his stories. But the funniest by far is Louise Brealey’s interpretation of a Victorian Molly Hooper.
Perhaps the biggest surprise is how Martin Freeman’s Watson all but upstages Benedict Cumberbatch’s Holmes. Freeman’s interpretation of the character in this series is one of the best ever. His Watson is not a buffoon played for comic relief, as has so often been the case since Nigel Bruce played the part in the still-popular film series of the 1930s and 40s. Instead we get a Watson who is intelligent, somewhat street smart and loyal to his friend and like Holmes, he is addicted to the adventure and the chase. However, Freeman’s Watson neither follows Holmes blindly, nor is he afraid to tell his friend off from time to time. In this production, it feels that Watson gets all the best lines, and Freeman hits the mark every time.
Ironically, Benedict Cumberbatch does not fare as well in this production. We do not see his Holmes do any deducting and at times he comes across as more of a jerk than usual. Though in fairness to the actor, the problem is the way his character is written, though again late in the film it makes some sense. Still Cumberbatch has more than earned his way into the debate as to who is the greatest actor to ever played Holmes. 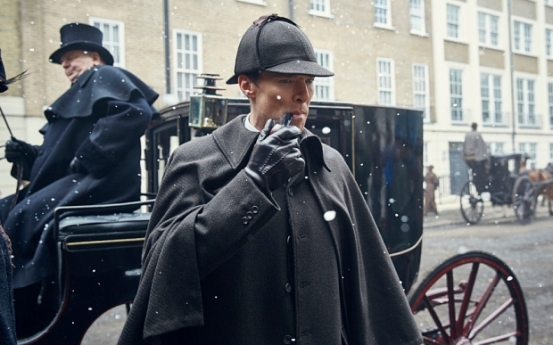 The Bottom Line:
Having literally seen over a hundred Sherlock Holmes movies or television shows, this reviewer can honestly say that this is one of the best and most original production ever made of the detective not directly based on one of Doyle’s stories. Now bring on season four of Sherlock! -9.0/10
.
-Tom Elmore
Contributing Writer: Nerd Nation Magazine