On Nov. 17, 1978, something unthinkable happened. That something was The Star Wars Holiday Special. Indeed, the cast of Star Wars hit television screens that day with a two-hour CBS holiday special that has been almost universally panned by pretty much everyone ever since it aired. In fact, it was so poorly received, it’s never once been officially released in any format ever since. That’s right, it literally aired one time, and every trace of it was promptly buried by creator George Lucas afterwards.

But with a fandom as insanely dedicated as Star Wars fans… there’s always a way!

You see, long before the internet even existed, back in the infancy stages of comic book/sci-fi conventions, there was a small-but-strong group of what I like to call “first generation nerds.” This was back when being a nerd wasn’t even remotely as socially acceptable as it is today, so these fine men and women deserve all the credit they can possibly get. Many of these individuals were very much into tape-trading – a nearly extinct act in which people would copy and pass along, and re-copy, and pass along again VHS tapes with all of the random, rare, and hard to find visual treats they could get their hands on. For those of you dear readers that may be too young to remember this, think of it this way… it was basically pre-internet YouTube. Anyway, some dedicated fans began to circulate bootleg copies of the Star Wars Holiday Special, then more, then even more… much to the chagrin of George Lucas, I’m sure.

Yep. Literally every single copy you’ll ever come across of The Star Wars Holiday Special – then, now, and probably forever – is in fact a bootleg.

Now, I suppose I should point out that Nerd Nation Magazine in no way supports or condones this vile, vile behavior, no matter the circumstances. No one should ever bootleg anything, no matter how impossible it is to find otherwise. This article is merely to review and report on the film itself, not to in any way encourage anything – especially picking up a DVD of it at the next convention you attend that it will almost certainly be available for purchase somewhere in that dealer/vendor hall. That being said, let’s get down to this month’s RETRO REVIEW!

The Star Wars Holiday Special featured all of the original cast – Mark Hamill, Harrison Ford, Carrie Fisher, Peter Mayhew, and everyone else you’d expect were on hand… as well as a few new characters.

Writers Rod Warren, Bruce Vilanch, Pat Proft, Leonard Ripps and Mitzi Welch devised a story involving Chewbacca’s family (his wife, father, and young son) waiting for him to come home for Life Day, a sort of space-age Thanksgiving Christmas hybrid. Since he’s late they fear he’s been held up by imperial forces, a suspicion confirmed when First Galactic Empire police search their home for evidence of rebel activity. All this gives Chewbacca’s wife a good excuse to contact the various Star Wars characters, and makes for a touching reunion when the big Wookiee returns home safely. That’s pretty much the entire plot, but the time spent waiting for Chewbacca is filled with a bunch of musical numbers, random cuts to other, at times rather bizarre acts. There were some songs, some dance numbers, some very 70s visual effects, a performance by psychedelic rock legends The Jefferson Starship, and even a weird animated cartoon sequence which (believe it or not) serves as the very first appearance of none other than Boba Fett. No fooling, Boba Fett was actually first introduced in this.

Worth mentioning is the fact that the vast majority of the TV special doesn’t involve any of the original cast, and most of the two hours are dedicated to Chewie’s family members, random guest stars, and all those random cuts to random numbers. The whole thing really drags, and is admittedly very, very difficult to sit through. I could say more about it all, but I’m sure you all get the idea. 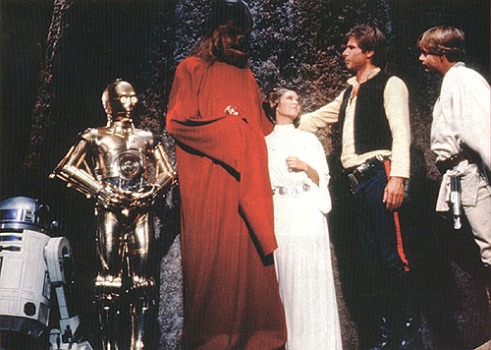 The Bottom Line:
Overall, The Star Wars Holiday Special is without a doubt the single worst Star Wars-related anything ever released… and given my well-documented opinions of The Phantom Menace, that’s really saying something. Looking back, it’s not at all surprising that George Lucas buried this one deep, and refused to ever release it in any format. In truth, it really is that bad. That said, despite all of that it’s really a testament to Star Wars fandom as to how this thing has miraculously survived all these years, even becoming something of a cult phenom. It’s one of those things you just have to see at least once… and you know, since you suffered through it, so should your friends. I guess in a weird way it fits into that “so bad its good” category… or, well, maybe not… it is really bad. Either way, though, it’s the true “forbidden fruit” of Star Wars fans everywhere, and I’m sure will see even more of a resurgence in underground popularity given the recent success of The Force Awakens. While I can’t in all fairness rate this, or (in the interest of legality) suggest that anyone go find a copy… if you just so happen to see it, it’s definitely worth doing once.