Just about everyone knows Herman Melville‘s legendary story “Moby Dick” – one of the most beloved and respected literary tales in history, but did you know that it was actually inspired by true events? Nathaniel Philbrick‘s award winning novel “In the Heart of the Sea: the Tragedy of the Whaleship Essex” tells the true story of the tragic and horrific events of 1820 that eventually inspired Melville‘s most famous work in 1851. Some 15 years later (and about 164 after the first printing of “Moby Dick”), director Ron Howard brings the true tale to the big screen with his film adaptation: In the Heart of the Sea. 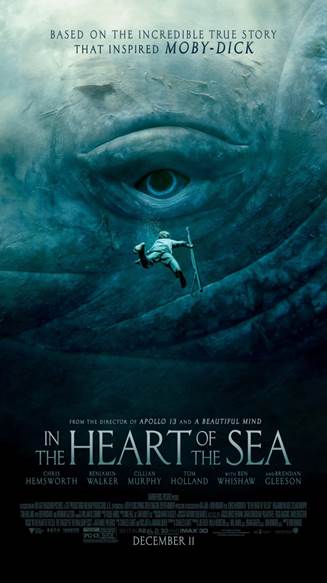 But how did Howard’s latest film effort actually measure up? Read on to see for yourselves! WARNING: THIS REVIEW MAY CONTAIN MINOR SPOILERS FOR THOSE UNFAMILIAR WITH THE STORY.
In the Heart of the Sea opens in 1820 in Nantucket, Massachusetts – during the height of the whaling industry. A young Herman Melville (Ben Whishaw of Skyfall. Spectre, Cloud Atlas) arrives at an inn ran by Thomas Nickerson (Brendan Gleeson of Into the Storm, Braveheart) an aging survivor of the tragic sinking of the New England whaling ship Essex. Though he at first refuses Melville’s requests to talk, his wife (Michelle Fairley of Game of Thrones) eventually convinces him to share his story. 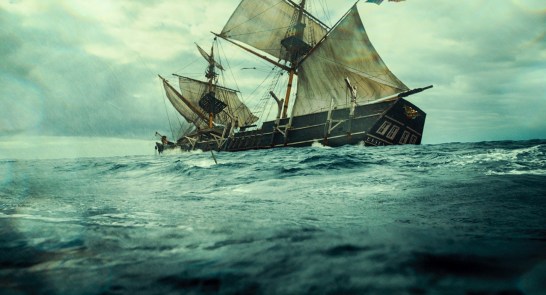 And so begins the story within the story, which starts off with Owen Chase (Chris Hemsworth of the Avengers and Thor films) an experienced seaman who despite being well qualified for the job of Captain is given the position of First Mate to George Pollard, Jr (Benjamin Walker of Abraham Lincoln, Vampire Hunter) a young man with no previous sea experience who is made Captain due to the wealth and legacy of his powerful whaling family. Along with their crew, the two set sail into the Atlantic on the Essex.

Although tensions are apparent between the Captain and First Mate, everything seems to be business as usual for the whalers, except for the fact that they just aren’t finding many whales out at sea. After stopping in Central America for resupply, they encounter a Spanish sea captain who tells them of an area far out at sea with a seemingly unlimited number of whales, but warning them of a “demon,” a giant white whale that destroyed his ship, killed most his crew, and even took his arm in the process.

Many of you probably see exactly where this is going from here, and you’d be 100% correct. They indeed find more whales than they can count, including the gigantic great white sperm whale of legend, who lays waste to the Essex in a fury, almost as though the sea creature is acting out of pure vengeance. Thus, the handful of survivors, along with what little food and water they can salvage from the sinking ship are confined to three small boats thousands of miles from shore. From there, they face months and months of nearly unimaginable hardship, with many dying, and others having to resort to cannibalism to survive. To make matters worse, it seems the great white whale is even following them. What will become of them? Well, to avoid giving away any more of the film (which I’ve given away a great deal of, as is) I’ll just say watch the movie, or go read about it somewhere on the internet. 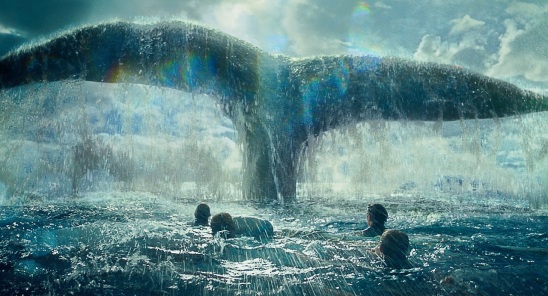 From a technical standpoint, the film is absolutely brilliant. It’s just as visually stunning as the trailers would lead you to believe, and the acting is absolutely superb from all involved. The sound/score is exceptional, everything is perfectly accurate to the time period of the early 1800s, and the cinematography is award worthy. There’s just one small problem… the film is also pretty boring and tends to drag… well… quite a lot. I’ve often referred to this as “2001: A Space Odyssey Syndrome” wherein a film is technically magnificent, yet is also painfully long and boring, something that, quite frankly, no movie should ever be. Ron Howard and company should (and most likely will) win their fair share of awards for this one, but make no mistake, this is not a particularly good film. It’s just not.

The Bottom Line:
Overall, In the Heart of the Sea is just what I’ve said here, a technically wonderful film that just drags on far too long and is ultimately boring and difficult to get through. Perhaps with about a half hour cut out of it, this could’ve been a better film, but honestly, I don’t really see how. That’s the thing with true stories; they’re not always exciting, action-packed epics… they’re just what they are. No more, no less. While definitely worth showing at any film school, and absolutely worth all the praise it can get for it’s technical prowess, it’s just not that enjoyable as a movie itself. This one is probably not worth spending the money to see in theaters, but if you can get through the dragging moments, it’s definitely worth seeing once on Netflix or DVD. – 6.0/10