Since a few of you have written in asking me to review something a bit more recent in my “Retro-Reviews” column, I’ve decided to push fast-forward on ye olde time machine remote and offer you something from only a few short years ago… not to mention one of the hands-down worst films I’ve ever actually suffered through for the sake of journalism… “Hellraiser IX: Revelations.” 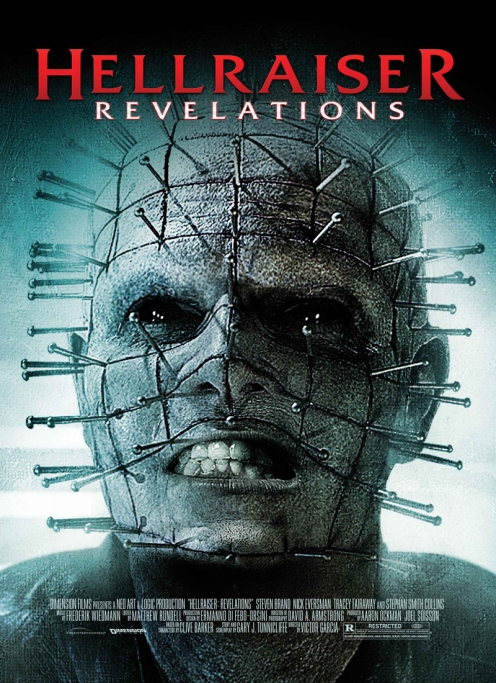 Still here? Okay! Let’s get down to it… time machine engage!

It’s pretty hard to believe, but the Hellraiser franchise has managed to sink to all new depths. “Hellraiser: Revelations”, the ninth film in the highly popular horror series (and one I had long since personally given up on) really brings an entirely new meaning to the franchise’s infamous phrase “your suffering shall be legendary”. Mind you, this suffering is not the result of any gruesome scenes, horrifying moments, or anything like that… it’s from actually sitting through this entire film.

The film, which was released on DVD in October of 2011, was literally produced in just a matter of weeks due to a contractual obligation on Dimension Films’ part to release another Hellraiser film or risk losing rights to the franchise. Also of interest, this is the first film in the series to not feature Doug Bradley as the iconic Pinhead, thus preventing him from a record-breaking ninth consecutive performance as the same character in a horror film. Instead, Bradley remains tied with Robert Englund at eight.

The unusually quick turnaround notwithstanding, this is the first film since “Hellraiser IV: Bloodline” to be based on an original script, as well as draw influence from the original source material (Clive Barker’s novella “The Hellbound Heart”). The story follows the fates of two friends, who travel to Mexico together and (you guessed it) discover a strange puzzle box that opens a portal to a sinister alternate dimension inhabited by sadomasochistic demon-like creatures known as Cenobites. From there, it’s just about everything you’d expect from a direct-to-video Hellraiser sequel… and I mean that in the worst possible way. The overall performances are mediocre at best, and the script/story really are all the typical things you read in a bad review of something. This was a rushed, mailed-in production and it shows.

In response to the film’s “from the mind of Clive Barker” advertising, series creator Clive Barker publicly stated (via his Twitter account): “I want to put on record that the flic [sic] out there using the word Hellraiser IS NO FUCKIN’ CHILD OF MINE! have NOTHING to do with the fuckin’ thing. If they claim its [sic] from the mind of Clive Barker, it’s a lie. It’s not even from my butt-hole.” So far no other statements (official or otherwise) have been issued from Barker on the film.

The Bottom Line:
Let me be clear, I was (and still am) a huge fan of the first four films in the Hellraiser series and I can even manage to (even if just for the sake of journalism) mildly-appreciate a couple of the direct-to-video sequels; but there comes a point where something is just flat out abysmal! While I understand why this film was released so quickly, surely The Weinstein Company has enough money to give us something at least marginally better than the stinker they churned out here. Basically if you’re a die-hard Hellraiser fan and/or have a serious collection to think about, then I’d say it’s at least worth picking up a copy of the DVD or BluRay… or honestly, maybe just find it streaming for free somewhere… and giving a chance. Otherwise, I assure you this is just simply not worth your time.
– 2.0/10