Sometimes a film comes along that really cuts you deep. Occasionally, this film comes along so quietly, that if you’re not paying extremely close attention, you won’t even know it’s out in theaters. The End of the Tour, is one such film.

(image courtesy of A24 Films)

Based on true events, The End of the Tour stars Jessie Eisenberg (of The Social Network, Zombieland) as David Lipsky, a Rolling Stone Magazine reporter, and Jason Segel (of Forgetting Sarah Marshall, Freaks and Geeks) as David Foster Wallace, a writer whose newest book ‘Infinite Jest’ has become an international bestseller.

Set in 1996 over five days, Lipsky follows Wallace on the final stop of his book signing tour in an attempt to garner some pertinent background information on him, namely, his rumored heroin addiction, and various mental and emotional issues. This deception of his quickly becomes a problem as Lipsky finds that he truly likes the reclusive, writer oddball. Wallace reveals a look into his insecure inner soul that Lipsky cannot fathom as he believes Wallace has everything that he is wanting to achieve for himself. Wallace, who had had a success earlier in his life, opened up to his new friend about his complete emotional collapse and institutionalization. It’s a story all too familiar to many a writer, and one many will not talk about. That David opened up to Lipsky about what caused it and how he really hadn’t found his way out of it gives us a glimpse into his very bleak future, and of course his ultimate fate of Wallace’s real life suicide. 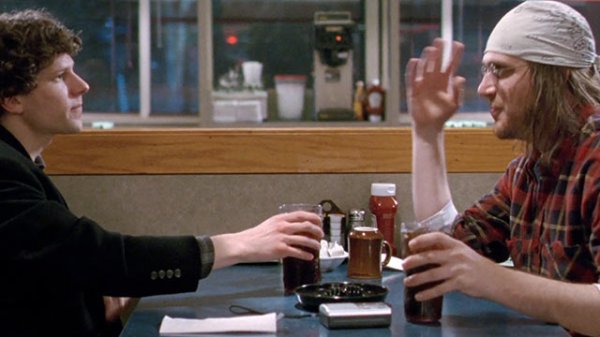 (image courtesy of A24 Films)

The film has a very “indie film” vibe to it, while not sacrificing much in the way of quality. It progresses nicely, though not at a particularly “normal movie” pace… more like a “this is just real life reflecting on a memory” pace, if that even makes sense. The soundtrack is brilliant, and accurate to the time period, the acting is very natural and believable, and the director does an amazing job of invoking a wide range of emotions throughout such a bittersweet, poignant, and all-too-real story.

The Bottom Line:
Overall, The End of the Tour is what it is. An honest, heartfelt look deep into the abyss of a tortured soul, holding up a mirror to so many who deal with similar issues, which is all the more powerful if you know that the real story behind the film ultimately ends in tragedy. Eisenberg and Segel both turn in amazing and exceptionally natural performances, and director James Ponsoldt does an incredible job with a limited budget and even more limited release. That said, this film is certainly not for everyone, and many casual viewers may find it dull, given its aforementioned real-life and indie feel. It could’ve done a much better job telling the whole story, particularly the (well-publicized, yet by this point perhaps not too remembered) ending, and could’ve honestly used a bit of a faster pace to keep viewer interest. However, with bits of comedy and life-lessons tossed into the murky mix, it’s not a total loss for those who don’t like too much darkness in their cinema. Highly recommended, particularly for writers and book lovers. It’s likely headed to Netflix eventually, and when it gets there, it’s a great late night flick. – 7.5/10