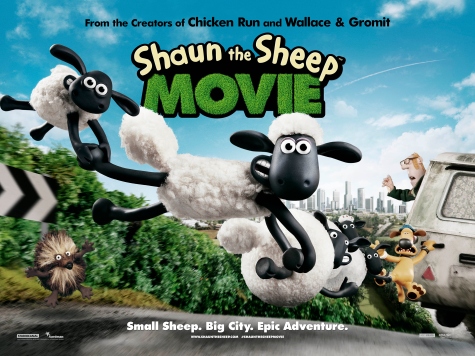 Check out the full review at the link below!

Based on British studio Aardman Animations‘ Shaun the Sheep series, which is in itself a spinoff of popular children’s series Wallace & Gromit, the Shaun The Sheep Movie tells the lighthearted and heartwarming story of Shaun, a lovable and mischievous sheep who lives with his flock at Mossy Bottom Farm. Bored with the mundane and monotonous routine of farm life, Shaun hatches a plan to escape and take a day off. But when things go awry and The Farmer ends up in the big city suffering from amnesia, Shaun quickly learns that big city life isn’t as great as they’d hoped, and that it’s now up to Shaun and his farmstead friends to rescue their friend and caregiver, while trying to escape a villainous Animal Control officer.

Writer/Directors Richard Starzak and Mark Burton do an exemplary job of storytelling, keeping it simple and lighthearted enough for a great family/children’s film, while masterfully crafting in plenty of humor for the grown-ups as well… and all without one single line of actual dialogue! A true feat in and of itself. The signature stop-motion animation style is superb, and exactly what audiences have come to expect from their previous work. About the only noticeable flaw in the film is perhaps its length, which even at a short 85 minute runtime, still seems to drag just a bit. That said, it does a fine job of keeping the action moving, the story moving, and holding the attention of its most important demographic: the kids.

The Bottom Line:
Overall, Aardman Animations’ Shaun the Sheep Movie is just an outstanding kids flick. It’s a well-crafted, heartwarming, funny, and generally enjoyable little piece of cinema that both kids and adults can appreciate. While clearly a kids movie, and thus obviously not for everyone, this is definitely a perfect outing for parents to enjoy with their children, as well as yet another excellent effort from the studio’s already impressive resume. So, all of our Nerd Nation-reading parents out there, go treat your younglings to a bit of cinematic fun with this one, you’ll be glad you did. – 9.8/10