Because Sharknado wasn’t bad enough, and the odd cult-like popularity of Sharknado 2: The Second One only fueled this crazy franchise, they had to go and make a third one. Like the other two, there was an impressive cast of B-lister movie stars, including David Hasselhoff as Gilbert Shepard, the father of Ian Ziering’s Fin Shepard character, and Bo Derek as the mother to Tara Reid‘s April Wexler character. The Hoff and Miss Derek were unable to be as over the top cheesie as the rest of the characters in this movie, so they were more believable than the rest of the actors. Which is a frightening thought. 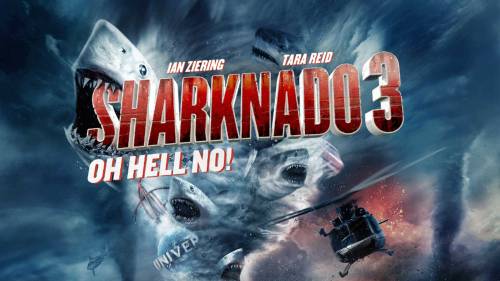 WARNING: THIS REVIEW CONTAINS SPOILERS:
(you’ve been warned! – click the link below to read more)

We start with Fin running towards the White House, but not because of the imminent sharknado headed for it, but because he’s late for an award ceremony in his honor. Of course the sharknado hits and Fin has to save the President. He, then, has to get to his family who are at Universal Studios in Florida. Shameless plug? I think so. Meanwhile, sharknados are popping up all along the eastern seaboard. Fin manages to get out of the traffic clogged D.C. area only to get stopped in a, don’t laugh, shark fog in some place in Virginia. Who saves our Herculean hero? Why, Nova, of course, with Frankie Muniz, who plays Nova’s mechanic for The Beast, which is a souped up R.V. that has an explosive fail-safe and machine gun roof accessory. Fin travels with Nova and Lucas, but they run into a slight problem with a washed out bridge. Of course, the resourceful Order of the Golden Chainsaw recipient has them go to an air force base where his good friend gives them the last of his fighter planes to continue their journey to Florida. Muniz sacrifices himself and the beast to the sharknado in order to get them off the ground. Nova and Shepard are off, but then run into more sharks, the plane goes into a flat-spin and they crash safely into a lake where they come out of their flightsuits popping up miraculously unscathed, Fin shirtless, and Nova in her undies, because… why not? That makes total sense. As much sense as them landing right where they want to be.

Meanwhile, Fins daughter, Claudia, is riding rides as Universal Studios, and his very pregnant wife is hanging out at a mall with her mother. Que sharknado! Claudia’s friend is eaten, but that’s okay, she’s managed to pick up a new boy toy, Billy (Jack Griffo from Disney’s The Thunderman’s). Wait! Claudia managed to leave her phone on a ride run by WWF’s Chris Jericho? Of course she did. Why else would they have a track my phone app installed on their cells? Both Fin and April go after their daughter’s phone, end up on top of the Rocket ride and have to battle a shark that makes lunch meat out of Jericho and sends Fin down the rollercoaster and flying off the rails, but Fin comes out of that with a few bumps, and magically Claudia, April, May, and Billy find Fin and they run into Universal’s giant wire ball sign, which then gets taken off it’s base and goes rolling through the park, killing sharks along it’s way, stopping on top of a tower.

As if we’re not shark drunk enough, they have to add more sharknados so they can build a wall of them. Fin has to contact his father for help, because, of course, his father is a former NASA pilot. They want to fly a space shuttle into the heart of the storm, detonate its boosters and fuel tank, in an effort to dissipate the storm. Fin plans on going up with dear old dad, but doesn’t tell April, so she charges up there to stop him and ends up stuck having to go into space with them. That’s right, boys and girls, the very pregnant April will be launched into space, but that baby won’t be forced out by the 3gs experienced by astronauts. Moving on. Their plan fails, so they want to use the Strategic Defense Initiative to shoot a powerful laser into the storm. Yep, the ole mothballed Star Wars project that we’ve spent unknown amounts of money on is to make an appearance in this disaster flick. Fin’s dad has to manually fire it, so we know he’s not coming back in the next movie. Yes, sadly, they’re not done with us. But wait! There’s more! Somehow, after the laser is fired, sharks are launched into space, right towards the shuttle. Fin gets to use a light saber chainsaw and April gets eaten. Fin goes after her, the shuttle is destroyed, Fin gets into what he thinks is the shark that ate his pregnant wife, but it isn’t. Then, Fin is forced to ride in the shark’s body all the way through our atmosphere without them burning up, to land alive on a beach. So, I might add, does April in her shark. April cuts through her shark and pushes out the newest member of the Shepard family, Gil, and Fin pulls her out. That should be the end, but no. They decided to leave a cliffhanger. Does April live or die?

The acting was over the top cheese as usual. The graphics were only slightly better than last time. The plot line was completely ridiculous and highly unbelievable, just like the last two. Almost everyone that tags along with the Shepard family ends up dead. The large cast of B-listers are either dead or incapacitated (only April’s mom survives) so they won’t be returning in the eagerly awaited fourth film. What? You know you love the high level of cheese these movies give us. Oh, you’re lactose tolerant. My bad. Still, this franchise has a huge cult following, so it can’t be all bad. Ha! If you believe that, I should go into acting.

The Bottom Line:
This franchise is bad for the sake of being bad. They’ve made a business out of really bad movies, so kudos to them. Sadly, I’ll be watching the next movie in this franchise, because, well, I actually kind of like them, and I’ve become deeply entrenched in their cheesy plot line and have to see it to it’s inevitably bad end. Bring on Rocky 5000! I mean, Sharknado 4.  It’s a really, really bad one. But hey, some people like that sort of thing. Sadly, that won’t save it from this score. — 4.5/10