Welcome to another edition of Comics Corner – for this issue, we offer up a reading recommendation for Justin Jordan and Kyle Strahm‘s comic “The Spread” – out now via Image Comics.

I’ve been a bit negative on the last few editions of Comics Corner, railing against fringes of the comic fandom which are trying to ruin everyone’s fun, so it is time to swing back to the positive side of things and give you a recommendation for a new creator-owned series to read.

From the cover of the first issue, a strong looking male character in a blood and gore soaked coat is holding a dripping hatchet while in a björn he is holding a cheerful infant also bathed in blood. My initial thought was, “what the hell is this about?” and I’m happy to say that judging this book by the cover led me to a new discovery of a great series.

The Spread tells of the story of No, a man of few words, the most often of which is “no”, as he traverses the Quarantined Zone scavenging the goods left behind by the unlucky. The Spread is a red swarm of hive-mind thorny tentacles which can form giant and fearsome beasts or infect human hosts and create zombies. The story opens with one such scavenging experience where after facing both The Spread and amoral marauders, No finds a baby which in turns reveals through crying that it holds an antidote which can devastate and kill The Spread. The series goes on to introduce multiple colorful characters all trying to survive insane landscape all trying to survive (or worship) the ever present danger of The Spread.

What personally attracted me towards this book were apparent nods and reminiscent elements to cinema I discovered and loved as a child and teen. From In The Mouth of Madness’ Cthulhu–esque mythology and religious tones, to the Spread itself also bearing resemblance to John Carpenter’s The Thing, to the stoic but deadly lead from Yojimbo, to the eclectic caricatures of characters in Mad Max: Beyond Thunder Dome, this series has infused many ideas and themes which I have dearly enjoyed my whole life without feeling like it is copying anything.

Also for those feeling books such as Saga and The Walking Dead are overhyped and garnered far too much attention (not to say they’re bad, just a bit overblown in popularity, in my opinion), but enjoy those subject matters and styles, this series offer the post-apocalyptic world building of The Walking Dead with narration akin to Saga.

The art in the series feels inspired by both Walt Simonson and Mike Mignola, and is able to violently and graphically action sequences, while not skimping on the quiet moments of drama and humor. The entire pacing of the layouts gives you the full range of these moments per issue creating an emotionally satisfying experience each time. The writing is exceptional and uses a narrator perfectly to info while not making it feel like a strange noir wannabe. 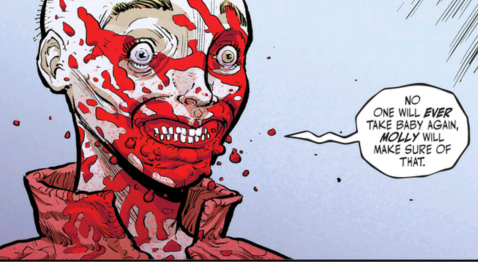 If you’re looking for a horror-themed series with great action and pacing I can’t think of a more satisfying recommendation. If you’re just looking for a new series to enjoy that you can quickly get caught up on, I highly encourage you to give the arc released (in a trade paperback) in April a shot.