It’s popular, it’s edgy, it’s dark and brooding, and it’s been in your face for the past year. Whether it’s FUNimation‘s advertisements, semi-A-List English casting, A-List Japanese actors, and A-List musical acts or just the number of people dressed like a barista wearing an eye patch at conventions, you’ve seen traces of this series everywhere. The manga was insanely popular even when it kicked off in 2011 and was even ranked fourth in sales for 2014, selling nearly seven million copies the year the anime came out. To top it off, 2014’s manga arc featured all new characters and was set several years after the original series. It’s practically a spinoff and it managed to get the fourth highest sales. Impressive!
That’s right – today, I’m reviewing Tokyo Ghoul. 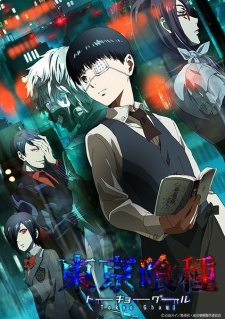 Tokyo Ghoul’s like that quiet emo kid in the back of your class who mumbles something to do with being consumed by the darkness. That’s Tokyo Ghoul in a nutshell. And if you like that sort of thing, great! You’ll love it!

Here’s The Premise:
This series is so edgy you could cut yourself on the intro alone. It’s about a college kid named Ken Kaneki who’s already a little shy and has some emo tendencies who falls for this hot older woman. They go out on a date and then BAM! She’s a ghoul and he’s supposed to be her dinner! In trying to escape her, there’s a freak accident and she ends up dying. Kaneki is wounded severely and rushed to the hospital where Rize’s (the hot woman) organs are transplanted into him.

And then Kaneki was the demon.

In all seriousness though, Kaneki becomes half-ghoul, half-human. While he inherited some really stellar fighting skills and a wicked looking eye to go with his edgy personality, he’s not thrilled about being a total outcast. And then there’s that little detail about eating humans to survive. Needless to say, he has adjustment issues to his new way of life and finds it difficult to cope with consuming humans. Fortunately for him, there’s an underground network of ghouls who will help him get food without cannibalizing his morals. Of course, society wouldn’t allow monstrous creatures to roam the city, feeding on humans. Ghouls are being hunted by a special task force called the CCG… wait… As in… Collectible Card Games?

Review:
Tokyo Ghoul attempts to elicit sympathy for both sides of this ghoul war. Yeah, some things are pretty bad for both sides: like people dying and leaving their families behind. Yes, humans are just as bad as ghouls. The ghouls didn’t choose to be ghouls and crave juicy human flesh. Is this dual-sided sympathy really a new theme? Haven’t we seen this in, oh, I don’t know, like at least a hundred other anime? It’s one thing to develop characters and tell the story in a way that warrants sympathy. It’s another to shove it forcefully down your throat with torture scenes and bad writing. This is where Tokyo Ghoul falls short of being something great like Akame Ga Kill which successfully developed characters on both sides of a war enough through excellent dialogue and pacing so that, when characters were pitted against each other, you felt a little conflicted about who should win. That’s how you do it.

Even the power curve isn’t addressed well. Characters just have powers and use them. There’s talk of Kaneki training with someone, but you never actually see it on screen for more than maybe thirty seconds. Which begs the question: did he ever go back? Did he train more? If ghouls regenerate so quickly, how come some die so fast? Is that just because they’re weaker than the rest? What does it take to actually kill a ghoul? They all get impaled, repeatedly, but that’s not enough. Some can even have parts of their body chopped off and regenerate them in less than a few minutes. So, what’s the trick to killing them? What’s the limit to the amount of damage they can take compared with others? With Akame Ga Kill, it was about the Imperial Arms enhancing humans. Once they ran out of power, the human could die. In Neon Genesis Evangelion, the Angels had weak points but kept evolving to try to prevent penetration. Even Shinji could figure that out.

Speaking of Shinji, Tokyo Ghoul really took a page out of Neon Genesis Evangelion. It has the psychological horror moments where Kaneki talks to himself and Rize who still exists inside him. There’s the weird fish eye lens to make scenes feel super trippy, filters on action scenes, and then there’s the whole thing where his mask opens up, revealing his teeth whenever he goes berserk. Eva Unit 01 much?

If I’m going to watch a boy (yeah, I know he’s an adult, but he’s drawn like a shota and whines all the time, so he’s a boy) struggle with accepting himself and coming to terms with his reality while also having to fight to survive, with elements of psychological horror, a kuudere female lead, berserker moments, and decapitation, I’d rather just watch Eva. Thanks anyways, Tokyo Ghoul.

The “ending” is a lead-in to part two which started airing three months after season one wrapped up. It’s predictable, but I won’t spoil it. It’s an obvious moment of realization and acceptance that needed to happen. That aside, the torture scene isn’t grounded. The motivation for why someone is tortured or why the torturer is so zealous about his job and, specifically his victim, is left in question. Without having those questions answered, the torture scene serves one purpose: shock factor. I’m assuming and hoping the reasoning behind this is wrapped up in part two, but I won’t be watching it. I don’t care for torture scenes. Though I watch anime that have them, there’s at least reasoning and build up to it. I have a hard time stomaching torture scenes that are added for shock factor alone. I wish there was a tag on Anime Planet, Crunchyroll, or Anime Newsnetwork that would have alerted me to this. But, I guess that’s what I get for watching it when it’s relatively new. After talking with some of my friends who’ve been reading the manga, apparently the manga’s torture scene is more graphic and lasts longer. Yay.

Speaking of the manga, I’ve heard mixed things about it and the anime adaptation. Some people sing praises, others think that the anime didn’t really represent the characters well. Considering how one-sided each character felt in the anime, there’s plausibility to the original content being the victim of a poor adaptation job.

The Bottom Line:
Simply put, Tokyo Ghoul just doesn’t live up to the hype. Even for many fans of the manga, it falls short. The script is rough, there are countless plot holes, and it could really benefit from some anti-depressants. Sorry, this one just isn’t very good. — 2/10