Spy, staring Melissa McCarthy, Jude Law, Jason Statham, and Rose Byrne was hilarious. There were few moments where I wasn’t laughing. Full of action and intrigue, this movie delivered. Surprisingly. Having watched some of her previous movies, I already knew what to expect of her acting and comedic styling. What I didn’t expect was the comedic, almost slapstick styling of Statham. 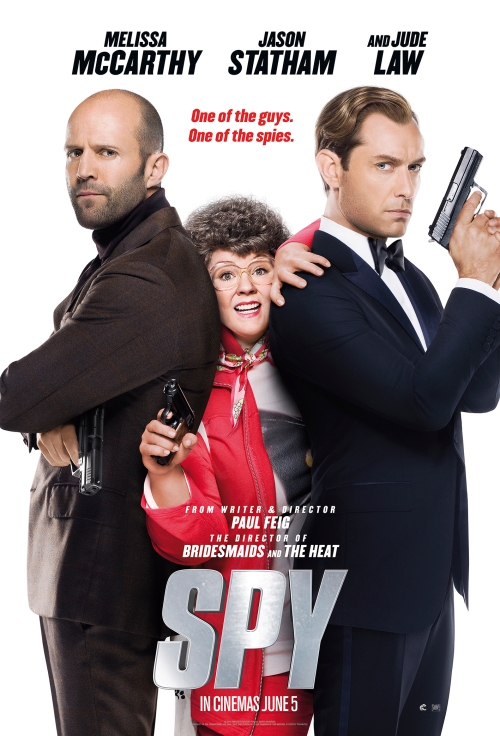 The movie starts with a serious McCarthy doing an extraordinary job as a CIA analyst/handler aiding agent Bradley Fine (Law) in infiltrating a lake party, where he accidentally shoots his target before the location of a nuclear bomb is given to him (it’s in the previews, by the way). He has to return to Langley empty handed. There, they realize that the target’s daughter must have the location of the bomb.

Fine is sent out again in order to retrieve the new target, Rayna Boyanov (Byrne) and hopefully, the bomb. They fail, of course, otherwise the movie would end and we’d have none of the real comedy. We do, however, get a glimpse into what a jerk Fine is at a dinner between her and Fine just before the mission. I’m not going to say what happens, but it’s revealed that all of the field agents have been compromised by a mole, so it isn’t safe to send any of them after Rayna.

Enter Susan Cooper (McCarthy). She has the training, but lacks the outward temperament or look of a world class spy. It turns out, you don’t have to be a suave, sexy god/goddess to be a spy. Nope. A dumpy, quite, mousy woman will work just as well. She travels the world looking for Rayna, fighting really bad assassins and spys as well as dealing with a disgruntled Rick Ford (Statham) who believes, up until the end, that she was going to “screw up the mission.” Honestly, their interaction is absolutely historical. I had trouble breathing at some parts.

Eventually, Rayna is found, but McCarthy finds herself stuck pretending to be her bodyguard (not giving away how) and passing biting quips and jabs back and forth with her and some of her bodyguards. Don’t get me started on the moped chase scene or the bit with rapper 50 Cent (who is pretty funny himself) or the perverted Greek agent played by Peter Serafinowicz, and what is the deal with the mice?!

The Bottom Line:
I loved this movie. It was surprisingly good. Way over the top, as expected from McCarthy, but not so much so from her more serious co-stars. I say, go see it. It’s worth it. Also, stay until the end of the credits. You’ll see. – 8.0/10
-H. Collins
Staff Writer: Nerd Nation Magazine