Friday, April 22, 2015 marks the official theatrical release of the highly anticipated horror remake of Poltergeist. Nerd Nation was in attendance for the advance press screening one night earlier on the previous Thursday, courtesy of 20th Century Fox and Regal Cinemas.

First, a little background:
As a young child (circa 1982) I found myself being enjoyably scared at the theaters watching this, now classic, movie. I was not an unusual child for that time period, just to let you know. It was the so-called “Spielberg Era” of movie making, and the kids (and quite a few adults) were eating up the epic movies of the 80’s. That’s probably why we now have so many of our childhood films being remade into newer, and (at least allegedly) better versions. The 80’s brought us such nuggets as Stephen King‘s ‘It,’ and George Lucas‘ ‘Star Wars’ trilogy (which technically started in the late 70’s), and James Cameron‘s ‘Aliens’ movie, not to mention the newly revamped and revved up ‘Mad Max’ from director George Miller (if you’re interested, you can read the review of the NEW Mad Max HERE), and, of course, we cannot forget George A. Romero‘s ‘Living Dead’ movies done in the 80’s. All epic movies for an epic time.

But I digress. Those times are long over, and filmmakers now are trying to recapture the “glory days” by remaking, revamping, and reinterpreting those classic movies. (For those who might be wondering, I didn’t mention E.T. because I hated it. Don’t like it, tough). I will admit to quite a lot of trepidation when hearing that so many of my childhood movies were getting remade. Especially Poltergeist. It’s been a guilty pleasure of mine for many a year, and the thought of them remaking it was horrifying. Yes, I know there are better effects they can use today, and yes, the old stories may not relate to the newer generations, but why can’t they make up their own stories rather than taint the old ones? Rant over, lets move on.

THE FOLLOWING REVIEW MAY CONTAIN MINOR SPOILERS – YOU’VE BEEN WARNED.

Now onto the actual review:
Did I like the updated version of this beautiful classic? Yes. Could it have been better? Sure, but so could the original. The plot followed a similar lean. Family moves into an old home in a new neighborhood, much to the chagrin of the eldest child. Strange things happen, centered around the youngest child. Youngest child talks to no one, which weirds out middle child (the only male child). Parents find out that the house was built on the grounds of an old cemetery where supposedly all of the bodies had been relocated so no “bad juju” should happen. Rrrriiiigggghhhtttt. Then, little girl gets sucked into her closet, brother gets sucked into and released from the creepy ancient tree outside his window, after having battled the evil clown toy, of course, eldest child is powerless to stop all of this and blames herself. Moving forward, we introduce some of the major changes, most notably, the “magic mushroom” known as Tangina Barrons (a powerful psychic medium) is replaced by an Irishman who plays a paranormal investigator/exterminator on television. While it’s impossible to replace or recast the iconic performance of the late Zelda Rubinstein, her absence was VERY noticeable. Another major change is that the brother plays a stronger and more important role, while the mother and father are placed more into the background (if you haven’t seen the original trilogy this will mean zip to you). 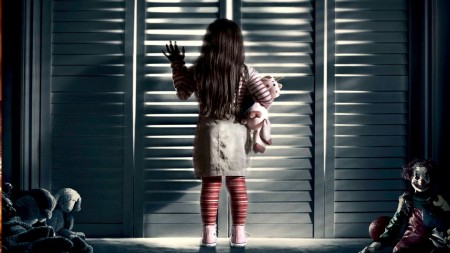 The updates to the graphics, while significant, really didn’t add to the films overall scare quality, but the creature effects were, well, creepy as hell, particularly in relation to the clowns. Yup, I said it. Clowns, plural. The nastiest bit of updating they hit you with is that they add several creepy clown dolls to the cast. I won’t lie, the made me jump every time I saw them (I hate clown dolls). The tree was scary, but not nearly as frightening as the original, especially since they picked a weeping willow rather than the majestic, and often creepy looking, oak from the original tale. Most of you yard-loving people will know that you never place a weeping willow that close to your home. Its roots will go straight for your water pipes every time. One as old as that would’ve completely destroyed the house’s plumbing long before they had moved in. (I’m a little particular about incorrectly used trees. I’m weird like that.)

As I’ve said, the movie wasn’t really enhanced by the computer graphics, but they were well done. Their habit of shooting perspective shots from behind the house made it feel more like a doll house than a real home, but I’m guessing that was intentional. It added to the overall feeling of alternate planes of existence, since the ghosts/poltergeists were supposed to be on a parallel plane to the living one, which is mentioned in the movie.

Sam Rockwell did a beautiful job as the laid-off father barely holding it together, aided by his lovely and patient wife, played by Rosemarie DeWitt, who was also quite believable. My hats off to young Kyle Catlett who plays Griffin, the brother and middle child. His portrayal of a young boy struggling with an overwhelming fear of everything at the beginning, to becoming the would be hero at the end was simply amazing. I rather enjoyed his character’s progression, and I hope to see him again in some other film. The young miss Kennedi Clements, who plays Madison (Maddie) the updated version of the Carol Anne character from the original film, did an adorable job. She made that character fun and cute, rather than sweet but creepy. A nice change. The eldest child, played by Saxon Sharbino, was appropriately annoying, as rebelling teenagers typically are. There were some moments I know, if this had been the 80’s rather than the 2000’s, that her parents would’ve hauled off and smacked her, which I think Sharbino pulled off without a hitch.

The Bottom Line:
Overall, it was a fairly good movie with plenty of scares, and a few laughs. Fast paced enough for the younger crowd, but still with enough of the grit of the original to bring us classic lovers to the theater to watch it. But ugh, the clowns!!! — 7.0/10