As I’ve stated before in similar reviews, everyone loves a good meal, or at least in my humble opinion, everyone should. For as long, or perhaps even longer than history has been recorded people have been coming up with recipes and trying out new ways to prepare food in order to make it all the more enjoyable, and with all the recipes (not to mention less-then-stellar memories) out there, there’s a definite need to write them down, hence the advent of the cookbook… and now in 2015, boy are there a lot of them out there! But out of the massive pile of ordinary and often mundane cookbooks out there has come a really cool new trend perfect for geeks of all walks of life… fandom inspired cookbooks! 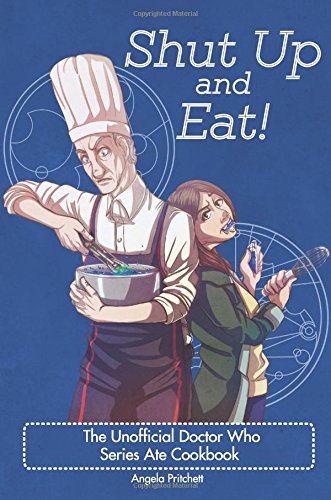 North Carolina based actress, author, artist, and all-around geeky Renaissance Woman: Angela Pritchett has released one such cookbook entitled “Shut Up and Eat! The Unofficial Doctor Who Series Ate Cookbook” and it’s exactly what the title suggests… a Doctor Who: Series 8 inspired cookbook! The cookbook features over 50 original and 100% edible appetizer, entrée, dessert, and even drink recipes all inspired by, and even titled after various characters/events in the widely popular Doctor Who series/fandom!

Some of the recipes included are “Dalek Stuffed Peppers,” “Nethersphere Tilapia Parmesan,” “Clara’s Turkey Wellington,” “UNIT’s Chicken Picata,” and “Little Time Lord Stuffed Turkey and Rice Peppers Soldiers” – just to name a few. It also includes several dessert recipes such as “TARDIS Meringue Cookies,” “Clara’s Black Forest Cherry Cupcakes,” “Mini TARDIS Whoopie Pies,” and “Danny Pink’s Heart Earl Grey and Cherry Tarts,” as well as cocktail recipes (both alcoholic and non-alcoholic alike) such as “The Grown Up Cyberman,” “Mrs. Pitt’s Long Life Concoction,” “Dark Water,” and “Karabraxos Cherry Cream Soda”. The recipes are divided up among 13 chapters (or “episodes” as the book calls them) are often accompanied by photos, and are all very easy to follow. There are plenty of original Doctor Who-inspired drawings/artwork throughout the book as well, complimenting the writing very well. There’s even a conversion chart in the back, so whether you use standard or metric, you’ll be able to follow along and put this cookbook to good use.

Overall, “Shut Up and Eat! The Unofficial Doctor Who Series Ate Cookbook” is a fantastic, well balanced, and fun cookbook. It’s well written, beautifully put together, and perhaps most importantly – easy to follow. Having tried out a few of these recipes for myself, I can also say that the dishes are pretty good too! Highly recommended for fans of Doctor Who, foodies, or just anyone planning a fun spooky-styled dinner and/or viewing party. I know I’ll be preparing some of these at my next Whovian-Get-Together.

“Shut Up and Eat! The Unofficial Doctor Who Series Ate Cookbook” (ISBN #978-1511724111) is currently available on Amazon through its CreateSpace publisher, as well as many other retailers. Interested? Pick up a copy HERE!

THE BOTTOM LINE:
A fan-tastic and fun cookbook that Whovians and foodies alike will love. Highly recommended!! – 10/10

One thought on “BOOK REVIEW – ‘SHUT UP AND EAT! THE UNOFFICIAL DOCTOR WHO SERIES ATE COOKBOOK’”