The not-so-unusual pairing of Bioware/EA – who are also well-known for their beloved-yet-controversial “Mass Effect Trilogy” – have returned with a brand new chapter in their highly-popular (and, well, also rather beloved-yet-controversial) “Dragon Age” franchise. Dragon Age: Inquisition, the third chapter of the epic fantasy RPG saga, dropped late last year to much fanfare, particularly its “next-gen” (or “current-gen” depending on which hairs you prefer to split about it) versions. This was the first Bioware/EA title to see a release on either the Xbox One or Playstation 4, and they definitely made the most of their new visual capabilities. The game is beautiful, no doubt about it, but, unlike a lot of gamers out there, that’s about the lowest thing on my personal priority list. My opinion: who cares what it looks like, what really matters is the gameplay, the story, and the overall experience. So with that in mind, let’s see how Dragon Age: Inquisition stacks up…

But first, like any good RPG, you’ve got some creating to do! The story focuses on your custom character: The Inquisitor, which thankfully is back to the old ways of the widely-praised Dragon Age: Origins, where you have a variety of different customizations (including gender and a variety of races) to choose from, and NOT like the widely-panned Dragon Age II where you have the option of being a male or female human named Hawke, and pretty much nothing else. After you choose your gender, race, how you look, your voice, etc. etc. etc. you have the option to choose to be a Warrior, Mage, or Rogue, which all of course have their own unique perks/hindrances depending on how you like to play (but don’t worry too much, you’ll meet plenty of all three types soon enough). 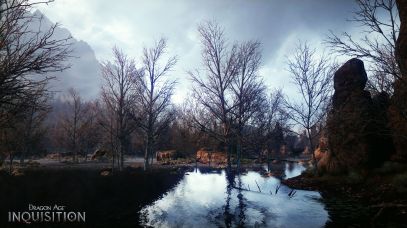 Of course, creating our character isn’t the only thing you’ve got to do here. You see, with the game being ported over to new XB1/PS4 friendly servers, you’ll also have to get your previous Dragon Age games/DLCs ported over! You can take previously saved world-states from DA:O and DA2 (and all of their expansions/DLCs) and load them into your new world, OR you can go into the story map and choose exactly what you want it to be. Here’s your chance to go back and fix everything you would have/wished you had/probably should have done – because Bioware/EA probably feels everyone deserves a second, or third chance, especially after we all gave them another chance after that Mass Effect 3 ending (we did all forgive them, right?) – anyway, once you get done with all the character and world building, it’s time to get this story underway! 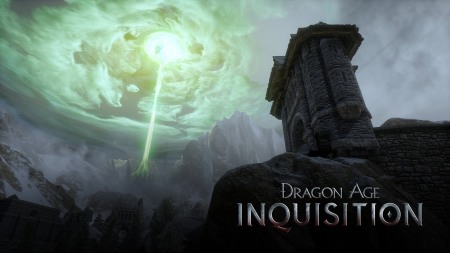 THE STORY
Dragon Age: Inquisition tells the story of The Inquisitor, a mysterious individual who falls from a giant glowing hole in the sky, or rather a giant crack in the fabric of reality which has caused a rift in what is called “the veil” which separates our world from the dream-world/source of magic/afterlife. This is pretty alarming to, well, everyone, because no one has ever done this and lived. Many believe you were saved by Andraste (human-turned-goddess, bride of “The Maker”/God, you get the idea) to be her Herald, but of course, many are also skeptical if you are indeed the one who is to be the savior against what appears to be a new Blight, or worse, a full-scale demon invasion or Armageddon itself. The parallels between the Chantry and modern-day Christianity are pretty obvious, but clear allegory aside, this vast and engrossing RPG effectively explores matters of faith and devotion on a very intimate level, surrounding you with a multitude of people, each of whom navigates the evolving religious turmoil in his or her own way. 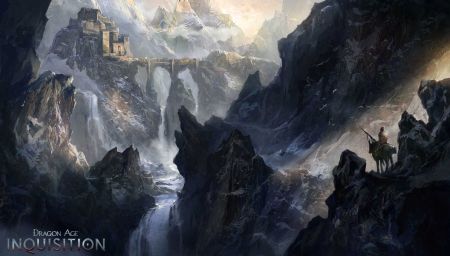 The chaos of the world you are thrust into (which spans both the Kingdom of Ferelden, and the Empire of Orlais) explores all the usual Dragon Age themes – the never-ending struggle between mages and templars, the role of the Grey Wardens in holding off demonic blights of the darkspawn, the many warring factions throughout, the cultural difficulties of elves, dwarves, and qunari among humans, and the political machinations of the Orlesian elite among them. But the Chantry takes a central role, and the ways in which the dialogue and gameplay decisions allow you to express your own personal views of faith make Dragon Age: Inquisition the most personal game in the series, which is a wonderful revelation given just how much real estate it depicts.

Among the aforementioned multitude of people, are several new party-members, including a few familiar faces from previous games. I won’t spoil anything, but I will say that the party members in this game are as good, if not better than those in DA:O, and definitely better than those in DA2. Again, I won’t say anything about any of them, I’ll just let you go play the game and meet them all for yourself. There are also, of course, DRAGONS! And believe me, if you go just a little off-the-beaten-path, you’ll meet more than your fair share of them on your travels… be ready for a big, big fight when you do! 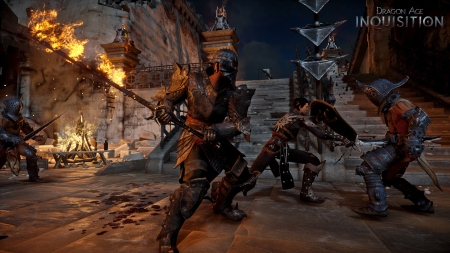 Combat is likely to be Dragon Age: Inquisition’s most divisive feature. It is fun and colorful, and if you bemoaned the loss of the tactical camera in DA2, you’ll be glad to know it is back, and available even on consoles, allowing you to direct the action from above. The tactical camera can be awkward, getting caught up on objects and sticking a bit too close to the action. On the other hand, the ability on consoles to use a single button to forward time instead of constantly pausing and unpausing is an intuitive tweak. But unless you’re fighting dragons or bosses, you probably won’t need the tactical camera very often, should you play on casual or normal difficulty. Instead, you perform your standard attack, which costs no stamina, while throwing in more powerful abilities for dealing additional damage and controlling crowds.

Controlling your companions is pretty easy now, too; you can somewhat customize their AI routines as you could in previous games, but there’s little need for micromanagement in this way. MOST healing magic is gone, so you’ll need to rely on health potions that replenish in camps and towns, and most tactical considerations, like throwing bombs and drinking draughts, can be dealt with from the default point of view. Ultimately, it’s a good system that works well in both wide open spaces and cramped caves, and Dragon Age: Inquisition is certainly the most fluid of the Dragon Age games. The loss of healing magic is a definite blow, and there are challenges out there, but it’s fairly easy to work around that one setback. For you hardcores out there, don’t worry, hard mode is always there if you want one, and dragon battles demand some serious strategy and concentration regardless of difficulty.

Most importantly is the fact that customization for companions is back! After so many people pretty much hated the way companions equipment was treated in DA2, it’s now back to the way it was in DA:O with fully customizable weapons, armor, gear, the works. Enchanting has seen a big overhaul as well. Although the loveable dope Sandal is nowhere to be found in this game, the weapon and armor creation/enchanting is incredible, and will surely offer countless hours of enjoyment for gamers that enjoy gathering/building stuff. 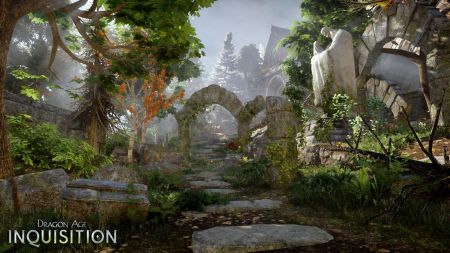 Overall, Dragon Age: Inquisiton is a beautifully crafted, brilliantly scripted, epic fantasy masterpiece set among a vast world of varying possibilities. A wonderful story, with diverse and interesting characters with real depth and personality, some of whom you may even fall in love with (and yes, you totally have the option for romances, no matter your own particular preferences). Tons of replay value here, and plenty to do to eat away hours and hours of your life… just as it did mine. 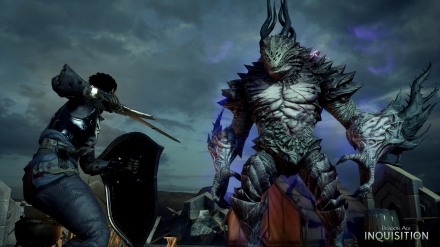 If you were a fan of Dragon Age: Origins, you’ll love it… if you didn’t particularly like Dragon Age II and thought it should’ve been an expansion while Awakening was the second title, you’ll DEFINITELY love it. — 9.0/10