There is a band I only know about because my wife listens to “Top-40” music, and any good husband can tell you, in the car you listen to whatever your wife wants to listen to, regardless whether that music is legendary rock band Rush or not. I first thought this band was named after a Canadian insult, but it turns out their name is Hozier. They have a lyric in their hit song that when I heard it made me think of comics. Well, when I first heard it I wondered if I heard the lyric correctly because I still think Jim is coming out of the closet on Purple Haze (I call him “Jim” because he’s dead and can’t tell me to call him Mr Hendrix). But the single line of the Hozier song that made me think of comics was “Offer me that deathless death.” 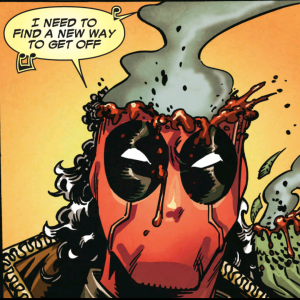 Now, if you know me a lot of things make me think of comics, but this line in particular actually has some purpose with what I’m writing about here. We’re talking about death. And there are going to be lots of jokes because everyone is cool with death and has no baggage when it comes to that subject (really there won’t be that many jokes about death, I’m just trying to get rid of sensitive people because in my opinion, they just shouldn’t be on the internet). But specifically we’re basing this on the upcoming death of Deadpool.

Now, the announcement of Deadpool dying confused many fans because he’s technically “died” so many times. If not per issue, then at least per story-arc Deadpool regularly is inflicted with a mortal wound but his healing factor brings him back. He’s like Wolverine mixed with Bugs Bunny. But recently they took away Wolverine’s healing factor and killed him, so what’s to say Deadpool won’t have something similar happen. And in fairness to Deadpool’s personality, this issue could very well be released on April 1st of this year since it is scheduled for an April release, and if you can’t put those pieces together you probably aren’t a Deadpool fan. But that would mean the end of this article and if I’ve learned anything from the internet it’s that endless speculation is really the best thing. 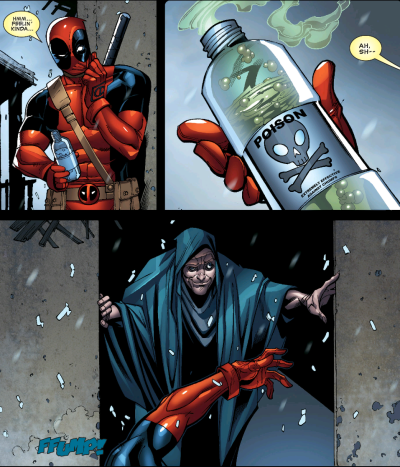 First, let’s get this out of the way; anyone who reads comics knows no one stays dead. In fact, I believe it was comic writer Matt Fraction who said of comic characters “the death is not as important as how they come back to life.” So the death of Deadpool may last for about a year at best. And that’s okay.

It’s okay because maybe Deadpool needs to die. Why? He’s everywhere and he’s over-saturated. He’s become this one-note joke of a character that everyone expects to break the fourth wall and crack jokes on the audience, and frankly, it’s getting a little old. He’s had more mini-series issues than most characters get solo-run issues. He’s killed so many characters (out of continuity) that they resorted to him killing off literary characters and then killing the writing and editorial staff that worked on his comic. It’s so meta that sentence didn’t even make sense. He’s become a satire of himself.

It has gotten so bad that he’s almost impossible to write into an event series. Jason Aaron had to water the character down from what he’s become in his own series when he wrote him into the Axis event. And for the first time in a long time he wasn’t just the annoying ADD kid who forgot to take his medicine, but actually a nice foil for humor in the series. 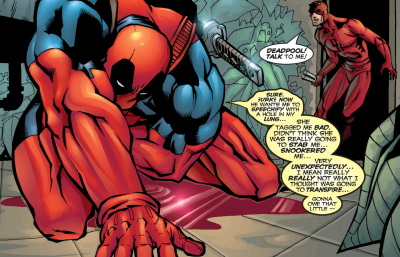 But even if his death doesn’t move the character back from the ridiculous, over-the-top, cartoonish line, at least it will be a nice pallet-cleansing from this character. I don’t care if you like him or not, Marvel Comics needs this. I love stout, dark beer, but you can’t keep drinking them constantly. Apart from the obvious vomiting and flatulence that occurs, a heavy, dark beer can coat your tongue and keep you from tasting even itself properly if you drink too much of it. That’s what Deadpool has become.

And there are some out there that just think Deadpool is dying because Fox owns the movie rights and Marvel wants to ruin the character so Fox will give the rights back. Do you think children run these multi-billion dollar companies? Do you think they are that petty? Hmm. Okay, maybe there are some extremely petty people that run these huge companies, but I still don’t think this is some vast conspiracy theory by Marvel to get the rights back from Fox. And here is the thing about conspiracy theories, if you make it up; you own the burden of proof. I don’t have to disprove you for coming up with silly ideas. I get to mock you until you offer me conclusive evidence (not speculation) that you are correct. So until Tom Brevoort comes out and says that they are all petty children who are pouting because Fox owns some of their movies rights, I’ll just say you’re a freaking idiot. Okay? I get to say that, because there is far more proof that you conspiracy theorists are freaking idiots than anything that proves your conspiracy theories. Okay. Deep breaths… calming thoughts about scientific proof and empirical evidence… Okay, so we’re talking about Deadpool dying here. Alright, back to work. 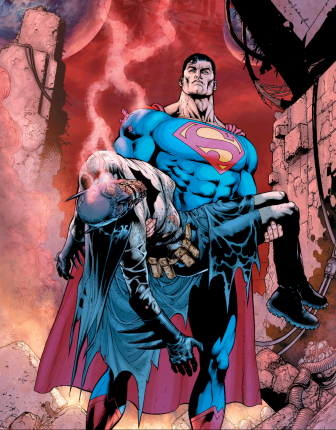 The important thing to note is that he will not stay dead. Late last year Marvel also killed off Wolverine, a less manic but still highly over-saturated character. There are people of course who are mad, and again there were conspiracy theories because Wolverine movie rights (like every character in the X-Men universe) are owned by Fox. But Wolverine/Logan/James Howlett/Patch/Weapon-X will eventually come back to life as well. Many characters across the companies have had this happen. So much so that in Abnett & Lanning’s “Guardians of the Galaxy” run and on-going joke is characters sit around and casually reminisce about the times they died and came back to life. Almost all main characters (and a large portion of secondary characters) by the major two publishers have died at one point or another have died and come back to life. Superman, Captain America, Batman, Spider-Man, Thor, Robin (Jason Todd), Iron Man, Barry Allen, Jean Grey, Hellboy (kinda), Colossus, and Green Arrow have all come died and come back. Do you need more examples? Okay! Nightcrawler, Wonder Woman, Punisher, Aquaman, Green Lantern, Elektra, Star-Lord, and each of the Fantastic Four at one time or another as well. And that is only a fraction of the list. Deaths in comics are as common as Resurrections in comics. Sometimes it is used to create a new depth and dimension to the character. Sometimes it is used to cleanse the pallet of the reader who has been over-saturated by a character. And sometimes, just sometimes, no one knows what the hell to do with a character, so why not?

Batman’s parents and Uncle Ben are really the only untouchable characters that can’t be brought back from the dead in comics. Virtually all other DC and Marvel characters are open to death and resurrection and they will probably experience it at one point or another because after both publishers have been at this for 75 years killing a character is about all that’s left you can do. So give them that deathless death. And seriously give me some empirical proof that Marvel is going to destroying their most popular and highly profitable characters because Fox is being a big meany and won’t give them the movie rights back, or shut the hell up!

Kevin McVicker is an independent comic book artist/writer from Greenville, South Carolina. In addition to his work on comics he is a regular contributor/columnist to both Marvel 616 Politics and (of course) Nerd Nation Magazine. The views and opinions expressed by Mr. McVicker are his own, and do not necessarily reflect those of Nerd Nation Magazine, or anyone else for that matter… so don’t be a d-bag and try to sue anyone over the stuff he writes.