It’s no secret – I’ve always been a big fan of H.P. Lovecraft. From the first time I picked up one of the legendary novelist’s reprinted collections of macabre tales (a very torn-up paperback at a thrift store, when I was about 14), all the way to the first time I watched 1985’s Re-Animator and sat down for a nice maddening game of Arkham Horror – if it was ‘Lovecraftian’ that was good enough for me! Seriously, H.P. Lovecraft is the only author I own audio books for, political propaganda posters for, AND even a cookbook inspired by his works (yes, I’m serious- it’s called “Cuisine From Beyond” go read the review here) – What can I say? I’m a collector; it’s in my blood. So when I was wandering around in the vendor room of ConNooga (which, by the way is sponsored in part by us here at Nerd Nation! Click the ConNooga link for more info on that great con!) a year or so ago, and came across a copy of Signal Fire Studios’ new game, “Building An Elder God” – it was inevitable that I just had to pick this one up and give it a shot. 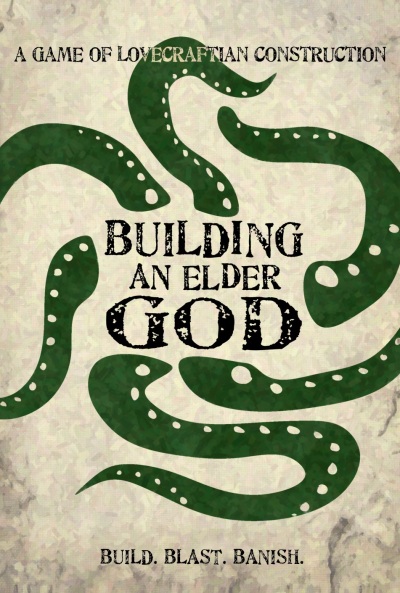 Now, you must understand that while Lovecraft’s works – particularly anything having anything to do with Cthulhu (who is a Great Old One and NOT an Elder God, by the way!) – are extremely marketable, with oversaturation comes… well, a whole lot of crap. Either they’re trying to completely re-invent the source material, or they’re just doing it no justice whatsoever. Luckily, that is not the case here. “Building An Elder God” actually manages to successfully navigate the fine line between over-complicated and under-simplified. And best of all, they never once mention Cthulhu, or refer to him as an Elder God!
This game knows its mythos! 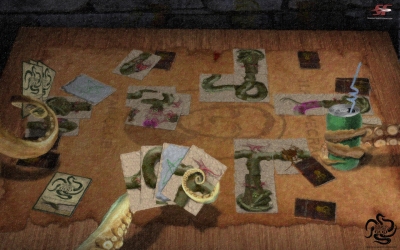 The rules are fairly easy to follow, and one good read-through of the instructions should have you ready to play. 2-5 players each set up their cards, and set off to build their own “Elder God” tentacle monster, while using their “Shotgun” and “Elder Sign” cards to prevent the other players from building theirs, and their “Necronomicon” cards to heal their own wounds. The first player to build a complete monster wins… and it’s just that simple.

That’s probably its biggest selling point (for me at least) as any given game session can be easily played in a half hour or less. Not that I don’t love a good all-nighter with a game like “Arkham Horror,” but sometimes you’re just in the mood for something quick and easy. (yes, yes, I’m well aware of what she said.) 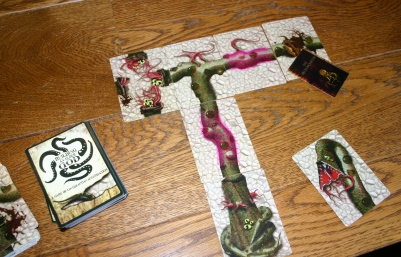 Overall, “Building An Elder God” is just that – a quick, easy, and most of all fun little card game. Never taking itself too seriously, or going too in-depth, it can work just as well for Lovecraft fans and casual players alike. If you’re looking for something a little more in-depth for a serious gaming night, I’d suggest you look elsewhere, but if you’re looking for a fun, and kind of kooky little party game (kind of like “Munchkin” only kind of really not) that you can just pick up and play, I’d definitely recommend it. But like any good game, don’t take my word for it… go hit up your local gaming store about getting yourself a copy… or stop by the Signal Fire Studios official website at: www.signalfirestudios.com