Another year, another 12 rounds of tasteless, classless, idiocy from your favorite curmudgeon. So to start out the negativity for the new year, I’m just going to come out with both barrels blazing and touch on something that has made my head shake as much as the new Star Trek films; and that is the big fascination with Zombie Dramas.. 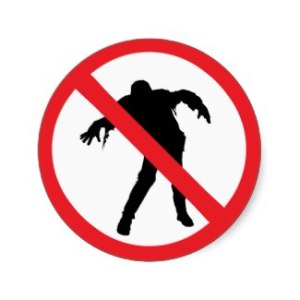 YES, that’s right all of you zombie fanatics, I can’t STAND Zombies; especially zombie TV shows. I have been in absolute awe that something that can be easily wrapped up in a two-hour movie has somehow morphed into TV shows that have lasted multiple seasons. Really people, how much drama can you possibly put into something as simple as re-killing walking corpses? The time and imagination spent on this one particular facet of fandom could have been better spent advising Fox not to make Marvel movies, telling DC/Warner Brothers to just stop it, or working their way through SIFFY (I still refuse to call them Syfy) to stop them from becoming the absolute travesty that it did.

Now don’t get me wrong, I watch the random zombie movie from time to time, mainly around Halloween when its hokey, cheesy, and appropriate for the season, but even still I realize that they all follow the exact same formula. Some kind of virus, or microbe, or chemical toxic waste (or something) causes people to die, the microbe (or whatever) remains alive/active and re-animates the corpse, and it goes searching for live flesh to eat/infect; lather, rinse, repeat. I refuse to go along with the whole thing of how they go after brains specifically, never mind that that was only ONE zombie movie that ever even did that (and it was the excellent PARODY of zombie movies known as Return of the Living Dead), but instead let’s focus on the fact that teeth (especially the rotting teeth of a zombie) will not penetrate a skull… ANYWAYS there are always the select humans that survive, and are seemingly too flipping stupid to get to a safe place or an area not populated until the zombies all corrode from dead flesh eating bacteria, vultures, sunlight, and basically everything else that will surely decay-the-undead-away. Instead, we have to extend this drama over several TV seasons, add intelligence to the zombies, and of course make it seem like there is no escape. Oh woe is the human race that can’t figure out somewhere to survive without turning on each other in the wake of a bunch of Walking Dead…

let’s be honest, this could just as easily be a photo of zombie fans…

You’ve seen it in that one AMC show that people just won’t shut up about, you’ve seen it re-hashed (and rehashed and rehashed) in nearly every George A Romero flick for decades (including the one that started it all: Night of the Living Dead, the public domain film that people just won’t stop trying to remake), you’ve seen it in every single no-budget pile of cinematic crap that it seems just about every single wannabe filmmaker out there just has to make (usually quite badly) like it’s some sort of rite of passage these days… yeah, you get the idea.

Point is – it’s not that zombies don’t work at all in horror, it’s just that they’re really, really, ridiculously overdone, and are far beyond played out. For the sake of sanity, maybe it’s time we just got over this whole thing already… at least for a while. After all, who are the real zombies here anyway?
This is Dave Ward, and you have just warped through The Negative Space.

Please Note: The views and opinions expressed by Mr. Ward in “The Negative Space” are his and his alone. They do not necessarily reflect those of Nerd Nation Magazine, or anyone else… so please, don’t be a d-bag and try to sue anyone over the stuff he writes. It’s called an opinion… don’t like it? The internet is a big place. Just read something else… preferably on here! =)