As the old saying goes – “if it ain’t broke, don’t fix it.” All too often, particularly in the realm of gaming, we see sequels just fall flat. This is mostly due to one simple problem… they’re trying to change everything. I know that in technology, change is inevitable, often necessary and everyone wants to improve on what is already there. Make the improvements where necessary, toss in a few cool new things, and always remember, just because there’s room for improvement, doesn’t mean one should completely change a winning formula that people like and are used to/comfortable with. 2K Games are notorious for both sides of this. For a good example of what not to do when it comes to changes, look no further than 2K‘s WWE 2K15 (you can read that review by clicking the link)… but for a good example of how to do it right, look no further than 2K‘s “Borderlands” franchise! 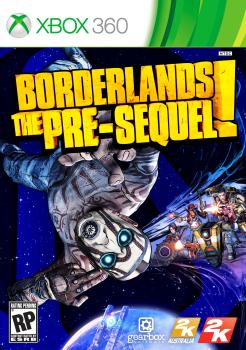 Let me begin by saying that, pound-for-pound, Borderlands: The Pre-Sequel is quite possibly the perfect continuation of a good video game franchise. There are plenty of little improvements throughout, but for the most part, it’s just like the first two “Borderlands” titles… you run around killing stuff, looting, shooting, completing missions, collecting/making “a bazillion” unique weapons, and immersing yourself in (what a lot of gamers call) “RPG-Lite” play.

Taking place in-between Borderlands and Borderlands 2, Borderlands: The Pre-Sequel takes place in a completely new environment. Instead of being on the planet of Pandora (as you were in the first two games), this title finds you on Pandora’s moon of Elpis (triple-bonus points if you get the reference of exactly why it’s named that), which as you’d expect from a moon has far less gravity than its respective planet. 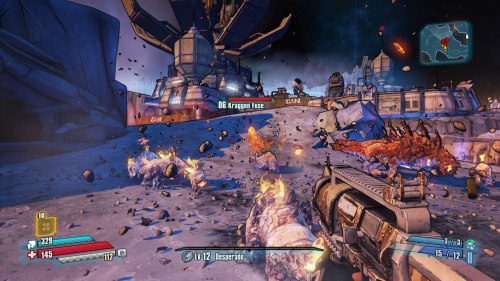 This allows players to traverse the new environment in totally new ways, with much higher jumping, and even double-jumping and the highly popular “butt slam” maneuver of using your oxygen kit (or, “oz kit”) to propel you downward onto opponents.  Your “oz kit” is needed to breathe on the moon’s surface, and if it runs out, you’d better find an oxygen source quickly. This actually adds sort of an extra little fun challenge to the game, perhaps more than you might expect. Also new to the series are laser weapons, freeze weapons, and of course the much-talked-about Grinder. The Grinder (a product of the DHAL corporation, soldier!) takes a combination of three items (weapons, shields, etc) and transforms them into one improved (sometimes, highly improved) item of the same type. 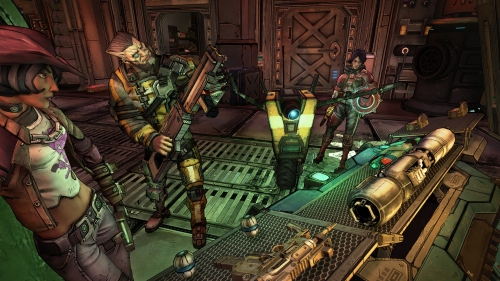 The story focuses on the rise of Handsome Jack (the main baddie from Borderlands 2) from a lowly programmer to the be-all-end-all head honcho of the Hyperion Corporation. He leads a team of newly-playable Vault Hunters (which will all be very familiar to seasoned players) — They are: 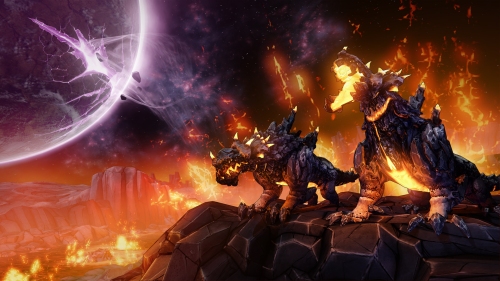 Each of these characters are very well-developed, with complete backstories, as well as a fresh perspective to add to the universe of the Borderlands franchise, without ever once taking them too seriously, or deviating from the signature humor of the series. As with both of the previous titles, such an approach is a welcome change to the “gotta save the world, bro, this is super serious!” vibe most (if not all) other “shooters” (or FPS titles) effuse. 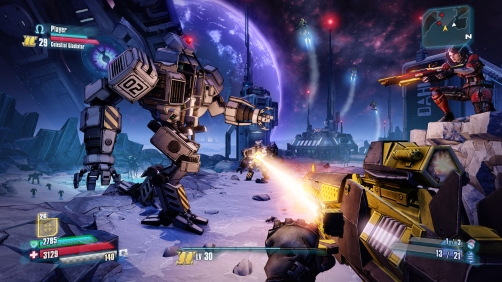 Multiple locations and unique enemies also work on all cylinders to keeping gameplay fresh. The tremendous range of locales and vast color palettes show off the game’s massive scope and character. You’ll often think you’ve seen all the game has to offer until a new enemy shows up to get you. The variety keeps you on your toes, even though adversaries in some areas don’t level up with you.

Also worth mentioning is the fact that this game supports drop-in local and online co-op for up to four players. You can even host a split screen game with a friend and save the other two slots for online allies. The game is just fine on your own, but once again shines in multiplayer as opposition and loot increases with each added human player. What’s even cooler is the game will let you skip story/side missions you completed in a group once you encounter them in your save: no matter how deep your party played in the campaign. You’ll only be ineligible if you join midway through a mission’s progress and always move forward whether alone or shooting and looting with friends. 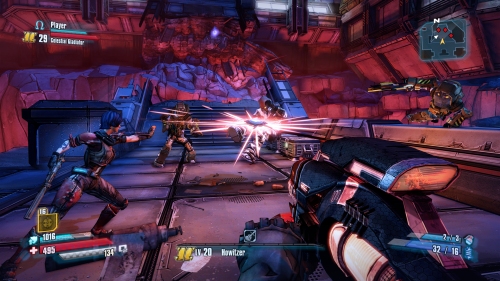 Overall, “Borderlands: The Pre-Sequel” is one of the best video game sequels (or prequels, or pre-sequels) not made by Bethesda that we’ve seen in a long, long time. They stick to their winning formula, make improvements only where needed (and do it correctly,) and they simply just don’t try to be anything more than what they are… good old-fashioned shoot-em-up sandboxing fun.

Easily a Game of the Year candidate, and definitely worth picking up and giving a shot, or two thousand shots, or a bazillon shots!

The Bottom Line:
Borderlands: The Pre-Sequel sticks to its (bazillion) guns, slightly modifies, but doesn’t change its winning formula, and it pays off in a huge, HUGE way… Highly recommended!!
9.5/10