Greetings and welcome to issue #6 of Jade Woodruff’s “Life on Anime” – this time around we have a very special feature for you! – An exciting fall 2014 anime season is here! Aside from watching the continuations of Sailor Moon and a few others, here’s my watch list and predictions for the 2014 Fall Anime Season. 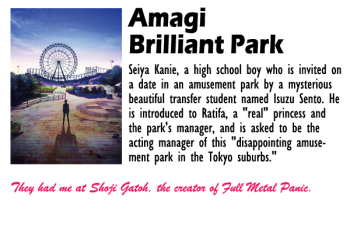 I’ve picked out a few comedies this season including the much anticipated Amagi Brilliant Park which is Shoji Gatoh’s latest and greatest. He created Full Metal Panic, a psychological school romance mecha comedy that spawned what I consider one of the greatest anime comedies of all time: Full Metal Panic Fumoffu. Amagi is another one of his slapstick comedy endeavors and I’m really looking forward to it! Maybe now I’ll be able to give my Fumoffu DVDs a break.

There are a few other titles on my must see list including Garo which features the director of Code Geass, Shigatsu wa Kimi no Uso which should be full of feels, and Sanzoku no Musume Ronja, a Miyazaki production which will probably be difficult to watch State-Side given Disney’s licensing policies. 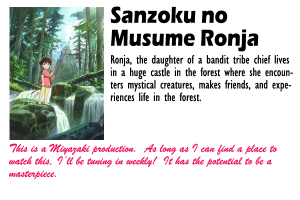 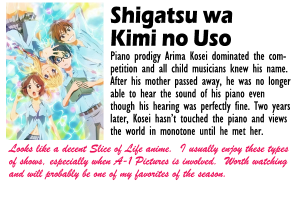 I will definitely be watching the highly anticipated and mouth watering Log Horizon Season 2. If you haven’t seen Log Horizon Season 1 yet, watch it on Crunchyroll over the upcoming weekend so you can check out Season 2 when it hits. Spoilers are bound to be rampant on the internet, so keep your blinders on! I’m looking forward to more character development for Akatsuki and, of course, more plot and awesome MMO-based fighting scenes with tons of magic, hand-to-hand combat, and pretty animation. Studio Deen will be animating the new season. Let’s hope Season 2 can hold up to the hype.

I’m not current with Psycho-Pass, Fate/Stay Unlimited, or Mushishi but those titles are also very popular and thousands will be watching them on live streams this fall. Fate/Stay is promising more depth to Shiro’s past and will feature Rin as the lead female. Get ready for the cosplays!

Other sequels include a Season 2 for Yowa-Peda, the shonen anime about competitive biking and Hitsugi no Chaika, the anime about a coffin girl who has tons of clones, from what I recall. Magic Kaito 1412 could interest some viewers. It’s by the creator of Detective Conan and is building on the existing Kaito franchise.

Depending on your interests, there are a number of promising titles for specific genres, but might not appeal to everyone.

There are a host of questionable anime. Leaving the children’s shows aside… here are some of the titles that may become great or could be some of the worst shows ever made. Others could be very average given that they have similar premises to other very popular shows but will probably fall short in comparison.