Dear Marvel, DC, and everyone else out there making comics… please… Deliver Us Some Evil!

With Sony’s recent announcement that they’re benching Spidey for a couple of movies to develop the villains for their next projects, The Sinister Six and Venom movies, my gut response is well, it’s about time because I think the comics-based cinematic universe is ready to expand beyond just the exploits of our standard heroes and delve into darker territory. There are a plethora of evil characters, anti-heroes and tales from the wrong side of the tracks that don’t get enough mainstream love. Now that James Gunn has blown all expectations for an odd property out of the water with Guardians Of The Galaxy, studios may be more willing to deviate from their comfort zones and give us some gripping tales of true twisted motives and the darkness that lurks in the hearts of mankind. 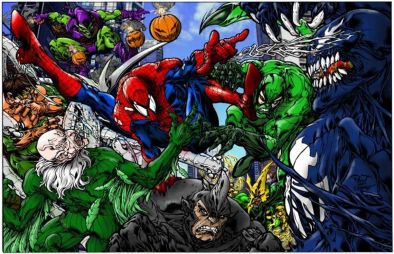 As much as all of us here at Nerd Nation would LOVE to talk about the forthcoming Sinister Six and Venom movies, we sadly just don’t have very much information at this time, soooo….

Lets start with the villain we’ve been looking to see more of from Marvel Comics and that’s Thanos. I can’t be the only one eager to see him get off that throne and quit grinning and get his hands dirty spreading some terror throughout Marvel Cosmic. His backstory, recently outlined in the Thanos Limited Series, of his birth and rise to tyranny on his home-world of Titan and the accompanying journey into insanity as the mad Titan would easily grip an audience.

Tales of murder as a child growing into his onslaught against the peaceful races of the galaxy and his subsequent spread of destruction and infamy across the known worlds would build the character up and make his inevitable clash with the heroes all the more poignant. C’mon, the character killed so many people he actually became the consort of the “anthro-po-morphi-zation” (is that even a word?) of Death herself. That’s no small feat of evil to attract the personal attention of the avatar of nothingness itself and filling in the history in front of us would build up the climactic end battle coming later to a much higher plane than it already is.

Changing course and looking back historically, the main problem I had with Captain America the First Avenger was how two dimensional the Red Skull’s character was. This is a man who grew up under the tutelage of Adolf Hitler, helped form HYDRA and became one of the longest-lasting and most impactful villains of the Marvel universe. Along the way he fathers a daughter he despises who longs to live up to his standards of evil genius, takes a character called Mother Superior as a consort who leads a religious movement of subversive nuns to corrupt and brainwash little goose stepping soldiers from orphans and the downtrodden to his cause and mentors Crossbones – one of the baddest contract killers in their continuity. Add that to his absorption/transport by the Tesseracht and tell the tale of how he masters it’s power and returns to our time to torment Steve Rogers and The Avengers anew and you’ve got a compelling rise paralleling Hannibal Lechter without the displaced elegance. There is easily enough story material over the course of his rich history from being a model Nazi to seeing the impending fall of the Reich and building a Forever Reich to space/reality hopping mastering the Cosmic Cube to fill a couple hours of cinema time with a build to give the character a better foothold in our universe and a justification for why he’s the ultimate antithesis to all that Cap stands for.

Let’s talk a minute about the walking abomination that was the Doctor Doom character in the big screen Fantastic Four movies. I’m not going into all the problems with that franchise because quite honestly I just don’t have the column inches or desire to revisit that travesty of a short-lived series. I wanted to see the Doom of the comics I grew up with. A gypsy child harassed and tormented by authority figures and the troops of his own nation who lost his mother to a demon and grew up mixing an unholy concoction of super science and dark sorcery and taking over the country of Latveria. What I got was a spoiled businessman with a facial scar and ego complex. When he took the Silver Surfer’s board and uttered the uncharacteristic tripe “let’s go for a spin”  – my son and I looked at each other in disgust in the theater and said simultaneously “let’s not” and walked out.

The Doom of the comics verse was an egomaniac but he earned it with struggle, victory, manipulation and accomplishment… our “Corporate Doom” of this last franchise just kind of earned scorn with bad Vanity Fair covers and his checkbook decisions. I want to see his underlying purpose to rescue his mother from Hell driving the character to overthrow a country and seek to amass power unfettered by any morality or thought for anything else than his personal mission to rescue his mother until his quest to achieve ultimate power blinds him to his original goal and he is corrupted absolutely while still clinging to his dream that he is the noble one and the rest of the world pales beside his personal battle with his past and the demons that drive him.

Taking it a step further, how much better would it be to build the Masters of Evil team that almost brought down The Avengers and introduced Wonder Man if it was done in their own separate feature? Time to explore their different backstories and motivations to bring such strong-willed personalities together would be a refreshing change of pace from the over-accelerated, “just hit the high-spots for marketing” approach I feel like we’re being subjected to from the new Spiderman franchise. I hope they leave this attitude of rapid-fire introductions and simplifications of character behind when they move on to the villains’ tale but I’m skeptical of Sony and their blatant profit-driven decisions. – Anytime a franchise pays more attention to their marketing tie-ins than the story they’re telling you’re sure to have problems but at least those very issues are most likely what spurred to look to the other side of the field so I won’t complain overmuch.

Jumping companies here, I think the only way we’re going to see Harley Quinn on the big screen is if she’s the supporting character in a Joker movie or a member of the Suicide Squad. The tale of the Joker’s seduction of her while she serves as his criminal psychologist and her descent into madness, obsession and crime as the “Reverse Stockholm Syndrome” tale of capture bondage could blow Play Misty For Me out of the water in a story of crazed fan becoming a psycho stalker with a very different angle for the Joker level manipulation and mind games going on. Think Natural Born Killers – with Harley and Joker in a twisted asylum backdrop. The visual alone have me reminiscing about Grant Morrison & Dave McKean’s masterwork Arkham Asylum and drooling over the possibility of using something like this movie as a bridge piece to get there. The other possibility is to assemble a big screen version of the Task Force X used in comics of convicted felons to attempt suicide missions under the watchful eye of the devious black-ops presence of Amanda Waller, the shadow government anti-hero/villain that walks the line between hate-to-love and love-to-hate so often that you forget if you love her malicious manipulations of bad guys or despise her as a roadblock to the redemption of the lost souls she pulls the strings of as her disposable marionettes .

Think of the possibilities for a genre busting piece focused tongue in cheek like Growing Up HYDRA – a teenage tale of angst and working to undermine the totalitarian imperialist world order now in place while also making prom and getting your homework finished. It would be a damn sight more entertaining than watching another “Bay-Splosion” piece and would help stretch the genre more and encompass a greater worldview than good versus evil tale of the day with this week’s plot McGuffin. Personally, I’d like to see more exploration into the ways people get enticed into embrace of the dark side and their back stories than more last-minute “hail-mary” devices. That formula is going to wear thin soon if we don’t take a fresh look at the ever-expanding comics properties hitting the cineplexes and what better take than one from the viewpoint of the characters working so hard to destroy our heroes and impose their will on the world, remaking it to suit their selfish ends?

The best part of all? — I’ve only scratched the surface of the vast wellspring of maniacal madmen and sinister sirens that the comics worlds have to offer. To quote the great Stan Lee from the 1970’s  – “Bring on the Bad Guys”
Who were some of your favorite comic book villains? Who would you like to see more heavily featured in movies, or even to get their OWN movies? Sound off in the comments below and let us know what you think!!